Disney’s Flower Power Even Surpasses The Gardens of Versailles

Posted on March 9, 2015 by floridatraveler

The 2015 Epcot Flower and Garden Festival just opened at Walt Disney World and thousands of flower lovers are arriving to see the new Disney character topiaries and blooms.

A few years ago Alain Baraton, head gardener of the famous Gardens of the Palace of Versailles, wrote a best seller about the activities of the 48 permanent gardeners who maintain the French attraction.  Versailles with its 800 hectares almost seems like a backyard garden when compared to Walt Disney’s gardens. 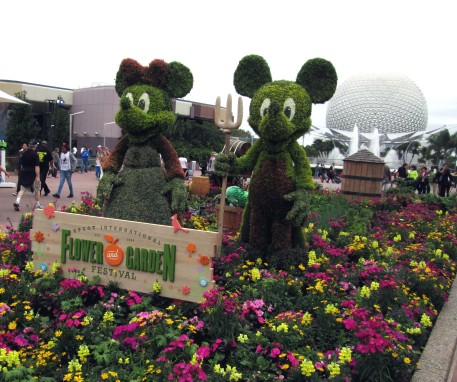 Mickey and Minnie Greet Epcot Visitors In Their Greens

Disney has 750 full-time horticultural staffers, 400 of whom spend time in planting 30 million new blooms and servicing the 700 gardens each year for the Epcot show.  This year the cast of Frozen joins 100 other Disney character topiaries on display.

If  you have ever visited Walt Disney World, you’ll realize that all the Disney parks, resorts, and byways are always manned by gardeners and workmen.  The 47 square mile amusement giant has 175,000 planted trees, four million shrubs, 13,000 rose bushes, and three million annual plants. 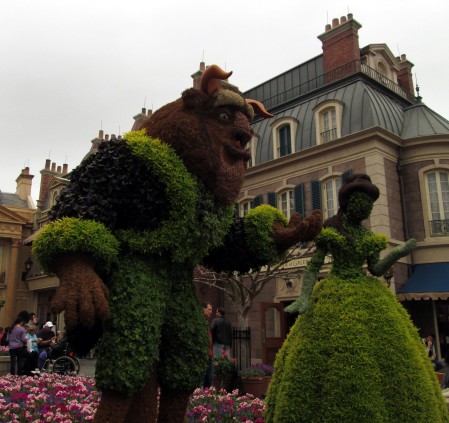 Beauty and the Beast Stroll Paris

The yearly purchase of maintenance equipment for all this gardening and landscaping goes into the millions.  Unlike Versailles, Disney has not cut back on any of its daily watering, not with 2,000 miles of water pipe and 65,000 sprinkle heads ready for usage.

Even if you are going to Walt Disney World to see the shows and rides, you should spend a moment and look around at the spectacular details of Disney’s gardening empire.

Historian and travel writer M. C. Bob Leonard makes the Sunshine State his home base. Besides serving as content editor for several textbook publishers and as an Emeritus college professor, he moderates the FHIC at www.floridahistory.org
View all posts by floridatraveler →
This entry was posted in florida history and tagged Amtrak, Epcot, festival, Florida, flowers, plants, topiaries, wdw. Bookmark the permalink.