150 years ago the Civil War was ending and events in Florida were starting to get dramatic, even though much of the state was still in Confederate hands.

On April 1, Governor John Milton, worn down by the stress of his office and depressed with the inevitable collapse of Richmond, went to his Marianna Plantation Sylvania and committed suicide with a gunshot to the skull.

Richmond fell two days later and almost a week later Lee would surrender at Appomattox, but the story for Florida would continue.   The Confederate officials were fleeing southward, some even talking about starting a new government in Texas, Cuba, or even the Bahamas.  All of this wishful thought involved reaching the poorly blockaded waters of Florida.

Florida also had a role in the mystery of the Confederate gold – an issue that has continued to cause debate between historians and treasure seekers.  What was left of the Confederate Treasury and the money from the banks of Richmond left Virginia in boxcars allegedly containing four Conestoga wagons and nine large buckboards of money and important records. 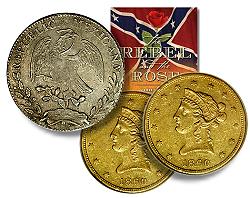 What happened to all the treasure in the Carolinas and Georgia is full of conflict, but here is the Florida aspect of the story.  On May 15, a small wagon train crossed into Florida and by May 22 reached the Cotton Wood plantation of Confederate Senator David Levy Yulee outside Gainesville.  Mrs. Levy told them the sad news that President Jefferson Davis had been captured on May 10th near Irwinville, Georgia.

The disturbed soldiers gave Mrs Yulee chests and bags containing Rebel records and President Davis’s personal items.  She temporarily had this material buried in one of her stables. 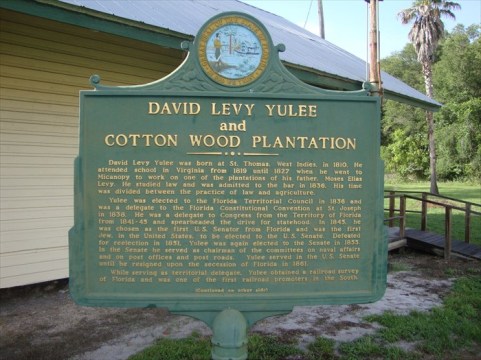 Site of Cotton Wood near Alachua

That night on the grade of the Yulee Railroad, the ten men that formed the unit, divided up the money, giving each soldier 400 gold sovereigns (c $1,940 in 1865) plus $55 in traveling expenses, and another $975 to two civilian scouts and five black servants.  The next morning Senator Yulee arrived and advised them to seek paroles, surrender and return home to their families.

People have speculated if the men hide their treasure before surrendering to Union forces in nearby Waldo or Baldwin. There were reports that Confederate gold was found around Gainesville.   Senator Levy had the Davis trunks taken to his Waldo railroad depot, where Union officials seized them.   When Captain O. E. Bryant arrived at Cotton Wood to locate the wagons and remaining content, Mrs Yulee gave the Captain Jefferson Davis’ French musket.  She told the soldiers there was no gold.

Meanwhile there was one Confederate leader who did make it to Florida.  Confederate Secretary of State Judah Phillip Benjamin had been with Davis as far south as Abbeville, South Carolina.  He then decided that Davis’ plans to resurrect the Confederacy in Texas was impossible and convinced Davis that he needed to escape to the Bahamas to organize Rebel officials who were in Europe.

Judah Benjamin: The Only Rebel Who Escaped

Although there are wonderful folktales of Benjamin disguising himself as a woman, the reality is the Danish Virgin Island born Jew pretended to be a Frenchman who knew no English.  Riding in a wagon and once an ambulance he reached North Florida but found all the ports filled with Northern troops.

The Gamble Mansion In Ellenton

He fled south to Robert Gamble’s sugar plantation in Ellenton, on the banks of the Manatee River.  Gamble recruited blockade runner Captain Archibald McNeill to take Benjamin, who pretended to be a cook, to Bimini.  Despite two vessels catching on fire and several Union inspections, Benjamin reached England where he and his family spend the rest of their lives.

Historian and travel writer M. C. Bob Leonard makes the Sunshine State his home base. Besides serving as content editor for several textbook publishers and as an Emeritus college professor, he moderates the FHIC at www.floridahistory.org
View all posts by floridatraveler →
This entry was posted in florida history and tagged civil war, confederacy, Florida, Rebel gold, treasure, Yulee. Bookmark the permalink.