The Legend and Myth of the Highwaymen

There are two historic buildings in Fort Pierce that pay tribute to Florida’s most popular impressionistic landscape artist – the Albert Ernest “Bean” Backus House and the Bean Backus Art Gallery, dedicated to his work.

While Backus (1906-1990) is viewed by many to be Dean of Florida Landscape Artists, he is widely and incorrectly associated with the rise and story of Florida’s most interesting twentieth century art group – the Florida Highwaymen, a group of vigorous African-American artists who have produced for sixty years over 100,000 landscapes of Florida.

While Backus, a white artist of some note by 1960, loved to teach local Fort Pierce artists his deft and bold use of his palette knife to quickly cover his canvas into a colorful masterpiece, he had just one future Highwayman as an art student.   But that painter was Alfred Hair, a man with a vision that selling Florida art to tourists was a better occupation than working in a field or digging a ditch.

Hair also realized that an unknown black artist could not sell his work for the $200 Backus made in his studio.    Thus, he developed a style which he called “Fast Painting” still emphasizing the bright colors and romantic designs of Florida beaches, roadways, and tropical plants, the type of topics a new Florida resident would be willing to put in their bedroom for $25. 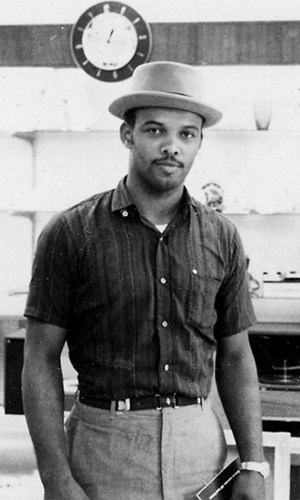 His paintings sold quickly and soon  he was training a half dozen black youths from Fort Pierce to copy his technique.  There was no “art movement.” Each artist selected his own topics and designs.  Most painting was done in neighborhood backyards.  And quantity was the key – sometimes the artists had all-night sessions to produce 20-24 paintings  each to distribute the next day to shops and stores along US1

People who own early Highwaymen paintings (I own one), will notice how they saved money by purchasing cheap 4′ by 8′ sheets of Upson board and cutting them into four 2′ by  3′ common size.   The frames of Highwaymen works were often made from crown molding purchased as scraps from construction sites.    Regular art supplies were rarely used by many of the artists. 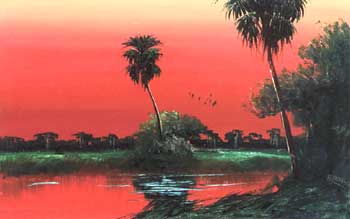 Alfred Hair Painting on Upson Board

In 1970 Alfred Hair was murdered in a dispute over a woman, but the twenty-nine-year-old artist had developed a cottage industry that would not stop.  By 1994, when promoter Jim Fitch gave them the moniker of The Highwaymen, there were 26 original artists whose works were on display along Florida’s East Coast.

The Highwaymen may have been a mercenary, individualistic group of artisans, but they motivated thousands of new Floridians to paint and draw Florida’s beauty in many mediums.  It might be romantic to think these unspoiled landscapes were sold along the Florida roadside, but their impact of Florida art can not be denied.

Historian and travel writer M. C. Bob Leonard makes the Sunshine State his home base. Besides serving as content editor for several textbook publishers and as an Emeritus college professor, he moderates the FHIC at www.floridahistory.org
View all posts by floridatraveler →
This entry was posted in florida history and tagged Florida, Highwaymen, painting. Bookmark the permalink.