Posted on December 1, 2015 by floridatraveler

PORT RICHEY AND NEW PORT RICHEY, West Pasco’s dual coastal communities, are best known today as booming retirement centers, but both towns had more basic origins. PORT RICHEY was started in 1883 by Missourian Captain A. M. Richey, who homesteaded on an island at the mouth of the Pithlachascottee River. NEW PORT RICHEY, once Hickory Hammonds, made the name concession in 1914 when the Port Richey Company began heavy development.

WHERE TO START: HEAD NORTH ON FL 595 (South Boulevard) from FL 518 (Trouble Creek Road), which connects with US19 five miles south of Port Richey. By taking FL 595 instead of US19, you travel north on the original (Grand Blvd.) entrance to New Port Richey and go thru Elfers, a once incorporated town with old houses. 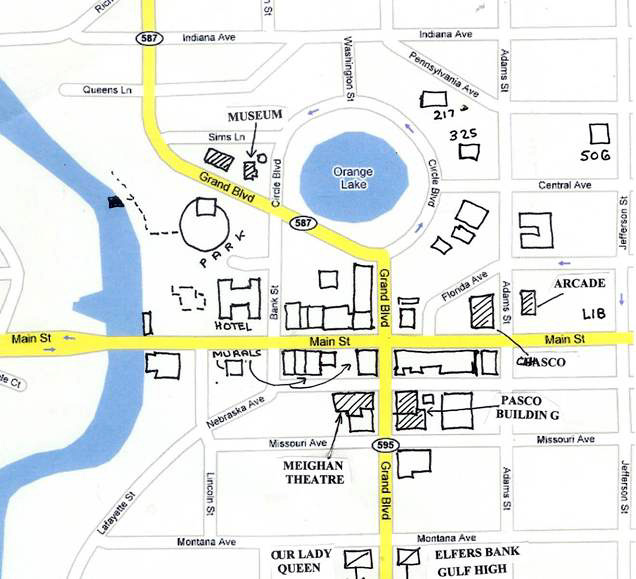 On your right after a mile you’ll see at 4116 Grand Boulevard the FIRST BANK OF ELFERS (1925), a Boom Town bank in the town started by J. M. Mitchell, developer of the first sizing citrus machine. Just south of High Street, on the right is OLD GULF HIGH SCHOOL (1922), used later by Pasco-Hernando Community College. If you travel to 520 High Street, you’ll see the attractive OUR LADY QUEEN OF PEACE CHURCH (1919), started by Rev. Father Ulrich, and featuring an Italian marble Shrine of Fatima (1954) by Wilson Cornell. The original one-story frame church is at 6710 Washington Street.

If you drive around Elfers, you should look at: OLD EDENFIELD STORE(1932), 4049 Grand Boulevard, a landmark of native rock and concrete and a building that has been a grocery, an auto parts store, and more; the OLD ELFERS SCHOOL (1914), 4136 Barker Drive, a two-story limerock and white brick Adult Center; and the PORTER L. PIERCE HOUSE (1913), 4121 Redleaf Drive, a frame house with tongue and groove walls.

A worthwhile sidetrip is to Centennial Park at 5740 Moog Road to see the SAMUEL BAKER HOUSE(1882) , the oldest Cracker vernacular in West Pasco County and a unique house with no structural frame.

Crossing the Pithlachascotee River into the commercial district of New Port Richey, you’ll note at 315 South Boulevard,) THE NEWPORT RICHEY TOURIST CLUB. By Nebraska Avenue is the THOMAS MEIGHAN THEATER (1925), 203 South Blvd., named for a silent film star and brother of architect James Meighan who also built the Palms Theater in 1927 on East Main.  It was Meighan who brought a group of Hollywood celebrities to the town to vacation and invest. 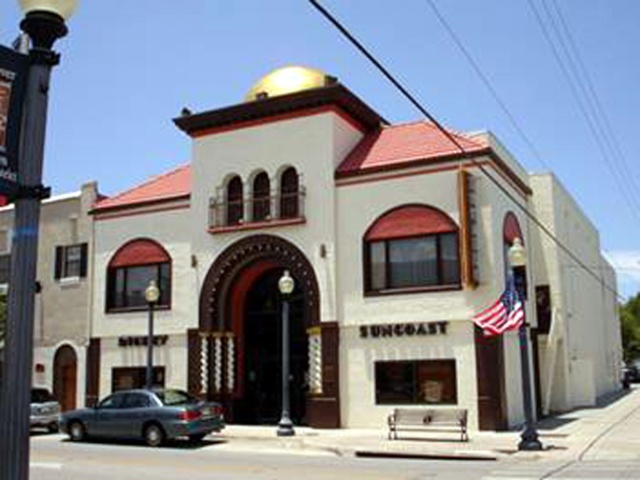 At 5327 Grand Boulevard is the 1920 CEMMIE BUTLER BUILDING, a business complex built with native rock. She once ran a personal laundry service at this place.

Across the street is another fine Mediterranean Revival structure, the PASCO BUILDING (1921), with an octagonal corner tower. It is a neat building with some nice shops. Down Main Street at 5743 is the CHASCO INN, built in 1924 and the oldest downtown commercial structure – a building that has served as post office, hotel, and bus station.

At 5728 Main Street is the MICHAEL MILBAUER BUILDING (1919), the first brick building in New Port Richey.

At 5805 is the ARCADE BUILDING (1927), another structure that once housed the post office.

TURN LEFT ON MAIN STREET. On your right a few blocks, TURN INTO THE ENTRANCE WAY of the: HACIENDA HOTEL(1927), 5621 West Main Street, once a 55 room tourist complex designed by James Meighan. Early investors may have included Gloria Swanson, Joe E. Brown, and Mary Pickford. Ed Wynn emceed the grand opening and for two decades it was a social center. As theChristian Hotel in the 1940’s, Rev. Billy Graham was a waiter.

EXIT VIA BANK STREET GOING NORTH toward the PORT RICHEY MUSEUM, 6431 Circle Boulevard, once the SEVEN SPRINGS SCHOOL and open on weekend afternoons. An old church has been added to this historical park. The WEST PASCO HISTORICAL SOCIETY meets here. On your left is SIMS PARK and the lake is ORANGE LAKE surrounded by Circle Boulevard. The playground is one of the best in the region. 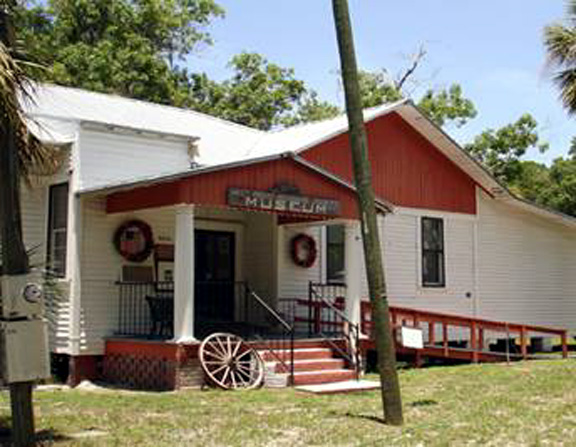 Just two blocks east at 506 Jefferson at Pennsylvania Avenue is the METHODIST CHURCH (1916).

DRIVE NORTH on NORTH BOULEVARD along the east bank of the Pithlachascotee River, past Mediterranean Revival homes and newer tract models. TURN RIGHT ON US19 and turn LEFT ON BAY BOULEVARD which shirts the northern limits of MILLERS BAYOU.

Off Bay Park Drive is WILMSLOW PARK with a good view of the Bayou. Continue down Bay Park Drive to end your trip at RITTER POINT on the Gulf of Mexico.

Off Sunset Boulevard is the OELSNER MOUND, the remains of a late Weeden Island Indian mound execavated in 1879 by S. T. Walker of the Smithsonian Institute.

Historian and travel writer M. C. Bob Leonard makes the Sunshine State his home base. Besides serving as content editor for several textbook publishers and as an Emeritus college professor, he moderates the FHIC at www.floridahistory.org
View all posts by floridatraveler →
This entry was posted in attractions, florida history, florida vacations, Historic Buildings, Historic Hotels & Inns, museums. Bookmark the permalink.