Key West: Still Crazy After All These Years

Posted on December 28, 2016 by floridatraveler

Anyone who has spent some time in Florida knows that the island of KEY WEST is the place to go for weird and crazy fun.  There is nothing ordinary about Key West and its wild and diverse population.

People don’t go to Key West to relax and look at the clear green waters.  There are so many weird items about Key West, we decided to give KEY WEST its own category.

People in Key West like to refer to themselves as “THE CONCH REPUBLIC” and it is not just the isolation of Key West ninety miles from the mainland that is noted.  During the Civil War when Florida seceded from the Union, Key West seceded from Florida. 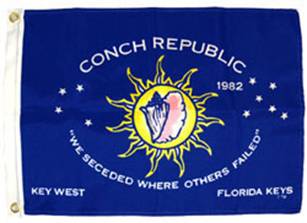 In a town filled with Cuban fishermen, transplanted Yankee sailors and merchants, a few pirates, and unknown others, the island remained loyal to the Union and Fort Taylor was a major supply center for naval operations in the blockade.  Ever since then Key West has told Tallahassee that they will take no guff from wrongful taxes and rules.

Key West has always attracted an arty crowd.  Writers, poets, singers, and entertainers are always welcomed in Key West.  And since the town’s nightlife never closes down, most freelance people like the fact they are left alone.  Tennessee Williams walked to the shops from his little cottage without attracting a glance.  Jimmy Buffet opened his first Margaritaville.  Robert Frost rented a tiny cabin.

But no one was more beloved than Ernest Hemingway who bought one of the oldest sea captain’s houses and even built the islands first private swimming pool (a costly venture for it had to be cut from coral rock).

Just about half the tourists who come to Key West visit his house, look for the ancestors of his deformed cats, and buy a Sloppy Joes T-shirt, even though most locals know that the original bar Hemingway drank in is two doors down.

To honor Hemingway, the town has a Hemingway Look-alike contest.  Maybe it’s just an excuse not to shave.  The town fills up with so many Hemingways that every table has a bearded one.    Hemingway’s Spain has the running of the bulls – Key West has its own version.

A town that plays and lives as hard as Key West should die as hard.  And no town dies with as much crazy class as Key West.   Most Key Westerners believe this is the way to get the last laugh on their friends and enemies.

The most popular tombstone in Park.

The cemetery is so popular it has a public toilet … which looks like a tomb.

I even found a section for pet animals and that was not typical.  It’s KEY WEST! 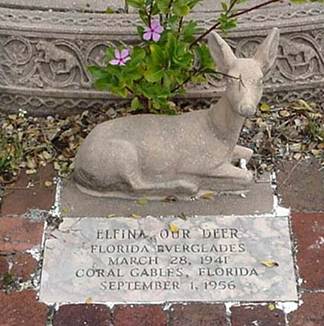