Florida Architecture Is An Attraction In Itself

Not everyone comes to Florida to enjoy the beaches, the sunshine, or such natural attractions as the Everglades and the St Johns River.   People find the diversity of cultures and lifestyles of the Sunshine State an interesting tour.

In this blog, I have written about most of the famous man-made structures of Florida such as Ed Leedskalnin’s mysterious Coral Castle in Homestead, the Underwater Hotel of Key Largo, the spiritualist village of Cassadega, and the utopian colony that existed in Koreshan State Historic Site in Estero.

Here is just a potpourri of buildings that always seem to fascinate or amuse or attract me. This is just a wide range of places you should visit if you’re in that part of Florida.

The award for most entertaining public building goes to the 1940 Church by the Sea in Madeira Beach ar 495 137th Avenue Circle.  The Spanish style church was originally designed with a light to be used as a nautical landmark for boaters in the nearby Gulf.  The light was ineffective and replaced with a large lighted cross.  What the architect never realized the church resembles “Chicken of the Sea” – a humorous cute chicken, as seen from almost every angle. 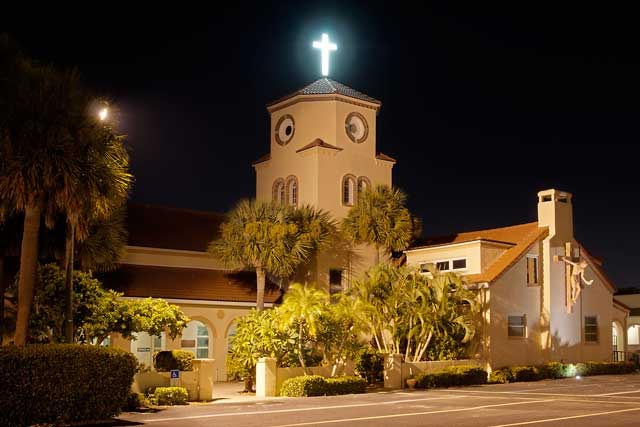 It is not the Chicken of the Sea Church

Most important symbolic public building is the Opa-Locka City Hall, built in the 1920’s by airplane pioneer Glenn Curtis, who wanted an exotic Middle Eastern look with its onion dome and colorful minarets.  With streets like Sharazad Boulevard (the hall) and Ali Baba Avenue, Curtis had a Land Boom dream for this development.  Today the town is usually cast as a nightmare – in financial straights, a high crime rate slum and blight of poor people.  A few years ago Miami-Dade County stripped the town of funding after money was misused. 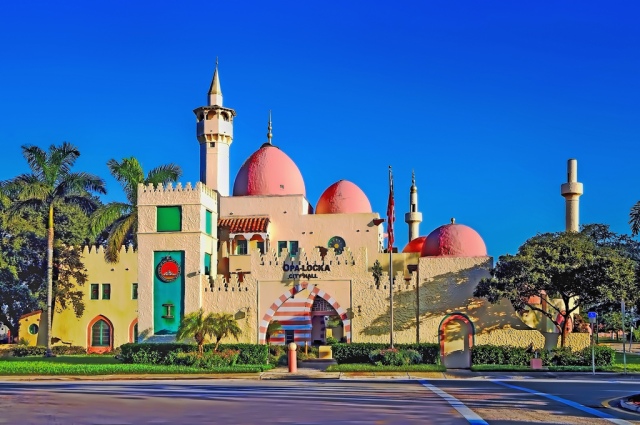 But people in Opa-Locka are trying to restore the town with a lot of art projects and new housing and restoration.  Their City Hall reminds them of their origins and dreams.

For my I have to look architecture I choose the remains of Stitsville in Biscayne Bay off Key Biscayne.  There are only seven of the original 27 fishing cabins left of Eddie Walker’s and everytime I am in Miami I have to look to see if the latest storm has cut down the numbers.  For deteriorating structures now owned and left to decay by the National Park Service, they sure are wanted as sites for movies and TV shows. 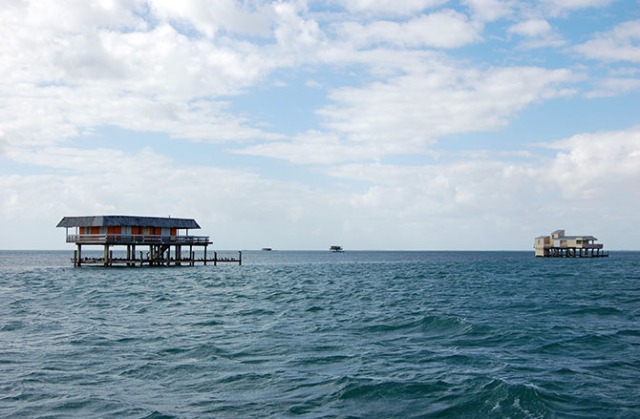 One Mile Off the Miami Coast Survivers

My favorite exotic restaurant design is The Bubble Room out on Captiva Island.  Taking and old rustic beach cottage and jamming it with more curios than the Smithsonian has exhibits, the original owners started decorating with classic dolls and toys, but over the years everything nostalgic from old fashioned Christmas items to Hollywood glamour shots has plastered every inch of the building.  If you can stand the pumped in pre-Laurence Welk music, you like the American menu for lunch or dinner. 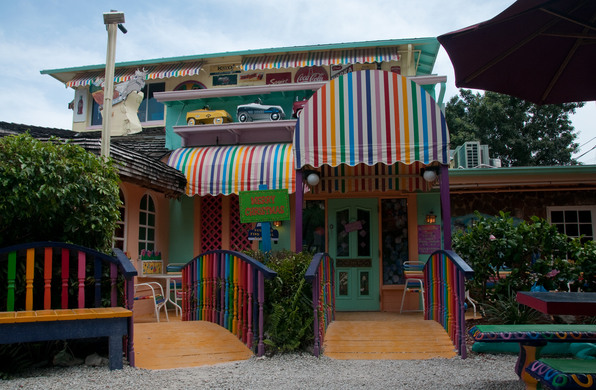 The Inside Is Actually More Colorful

Most unusual historic building is another interior shocker.  The 1856 Haile Homestead on the plantation called Kanapaha, just outside Gainesville, looks like a classic vernacular structure until you enter the house.  Nearly every wall in the plantation is covered with 12,500 words and selected art works. 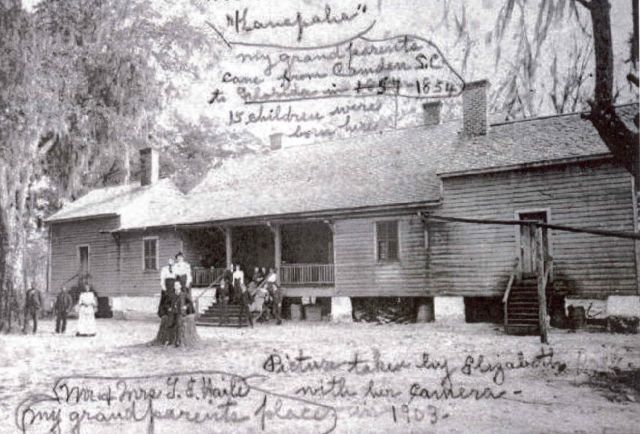 The Hailes Even Wrote On Their Own Photographs

This is not graffiti drawn by some wild street gang that broke into the building.  The words were written for decades by Thomas Evans and Serena Chesnut Haile and their fifteen children and it’s a strange family album of life in agrarian Florida.  The house is now a historical site so the private wall writing is now sponsored by the State of Florida.

Florida’s most beautiful house reflects by bias as a historian.  I have never found a home new or old, big or small, that matches James Deering’s 1916 Viscaya mansion.  The gardens resembles a walk on a regal Tuscany estate until you are confronted with the tropics of Biscayne Bay.  I saw a manatee cruising along the Renaissance boat dock. 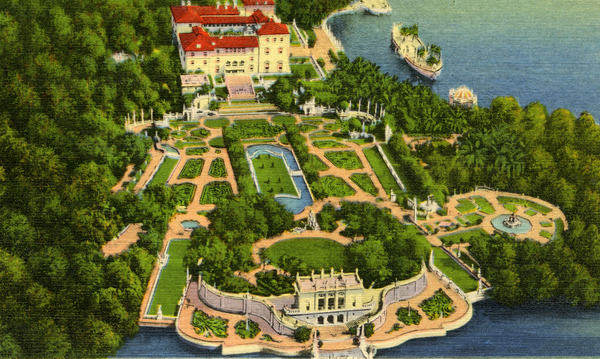 The Pride of the Coconut Grove

Every one of the 34 rooms open to the public is a magnificent showcase of exquisite taste in furniture and decoration.  Regardless of your architectural taste, you will be impressed. It is not shocking that I discovered it was voted the most beautiful building in Florida by the website Thrillist.com.

My most impressive museum is the modernistic Tampa Museum of Art by Stanley Saitowitz.   Sitting on the Hillsborough River across from the 1891 Tampa Bay Hotel (University of Tampa), the structure has glass and panels that reflect different views from every angle of the building, from the riverfront to the rising skyline of downtown Tampa.  At night the museum is a panorama of changing colors. 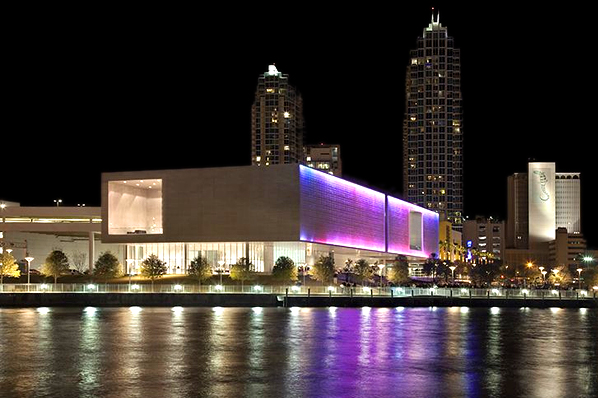 I will admit the Dali Museum in downtown St. Petersburg with its DNA helical staircase has the most exciting interior.  The glass enigma of 900 glass triangles looking like two giant space craft eggs crashing into the building would make Dali proud.

Polk County seems to have the monopoly on education with  the most impressive college campus.  Small private schools like Rollins and Stetson have more attractive campus designs than the gigantic cities formed by Florida’s big universities.  Lakeland’s Florida Southern University campus contains the Child of Sun collection, the largest gathering of Frank Lloyd Wright buildings in the world. 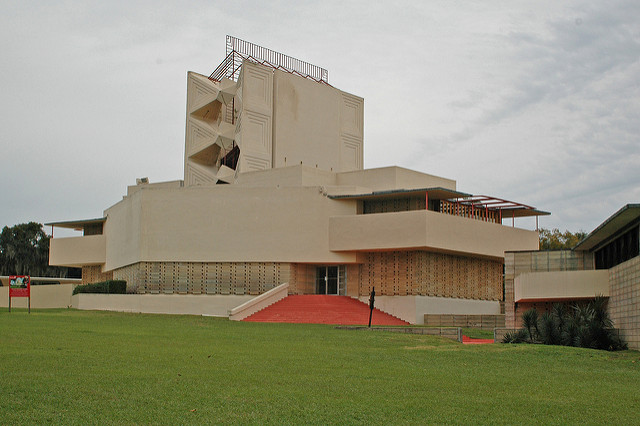 Ten miles east on I-4 is my most impressive education building – the Innovation, Science, and Technology building of the new Florida Polytechnic University.  From the distance it looks like a multi-armed robotic armadillo or space ship.  The view will change for the roof and walls move.  You have to walk into the structure to really appreciate its design. 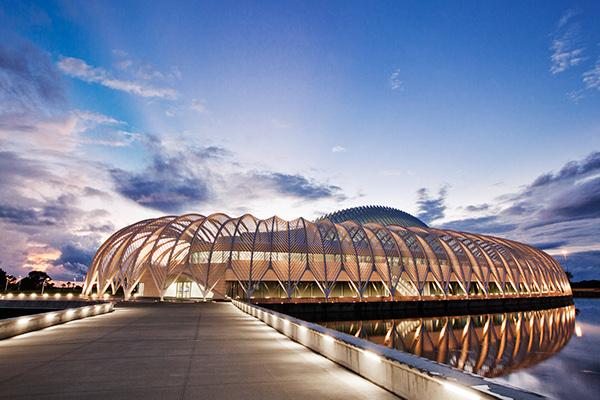 If you want to talk about modern architecture, you have to visit Miami, whose booming skyline is the third tallest in the United States.  I will confess I agree with those who state that the view has become in places a condo cluster of curved edifices with little concession to nearby structures.

Still I love seeing the twenty story Atlantis condo with its five story square hole down the middle.  Made famous by shows like Miami Vice, the Atlantis triggered a global list of buildings with empty spaces.  Actually if you have binoculars, you’ll see the square palm court contains a Jacuzzi and a red spiral staircase. 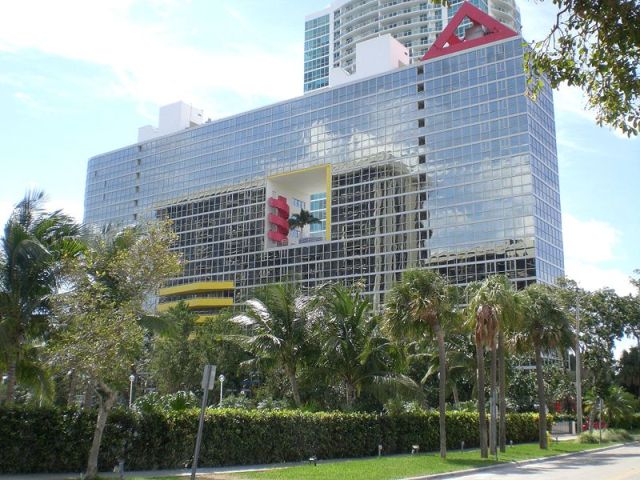 My favorite skyscraper is the second tallest building in Florida.  The789-foot Four Seasons Hotel and Tower goes up 64 smooth looking floors of steel. concrete, and glass.  A bank and offices are located on the first six floors, the 221 room hotel is on floors 7 to 36, and the 84 luxury condos do the upper floors.   The southeast side is the most photographed angle. 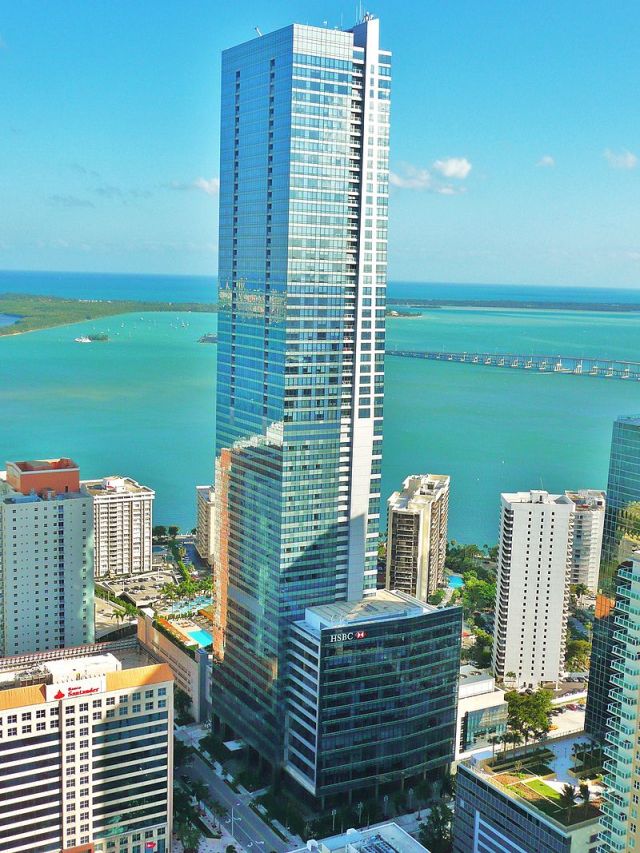 All this makes me want to take a trip around Florida.

1 Response to Florida Architecture Is An Attraction In Itself