Sarasota Is Still The City of The Arts

Posted on May 2, 2017 by floridatraveler

In 1936 circus magnate John Ringling died.  The man once worth over $200 million dollars had just $311 in his bank account. Yet in his will he gave to the State of Florida Ca’d’Zan, his 1.2 million dollar waterfront mansion, his 21-gallery museum with one of the world’s largest private art collections of Masters, and his gardens and grounds.   He wanted his Florida home town of Sarasota to be a center for the arts. 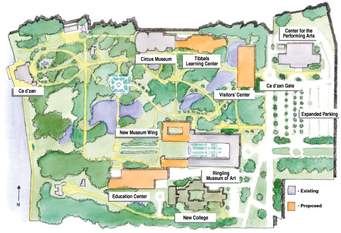 It took the State of Florida ten years to fight over the estate with Ringling’s many creditors.  The State and Sarasota not only got one of the great art museums of the nation, another legacy was the Ringling College of Art and Design, started in 1931, and rated as the #2 American animation school by Animation Career Review.

Ringling Gave Sarasota One of the World’s Top Art Collections

If Ringling came back to Sarasota today, he would be very pleased.   The St Armand’s Key shopping center out by Lido Beach is still lined with sculpture as is most of downtown Sarasota.  Main Street is filled with art galleries and bookstores and quality antique shops. 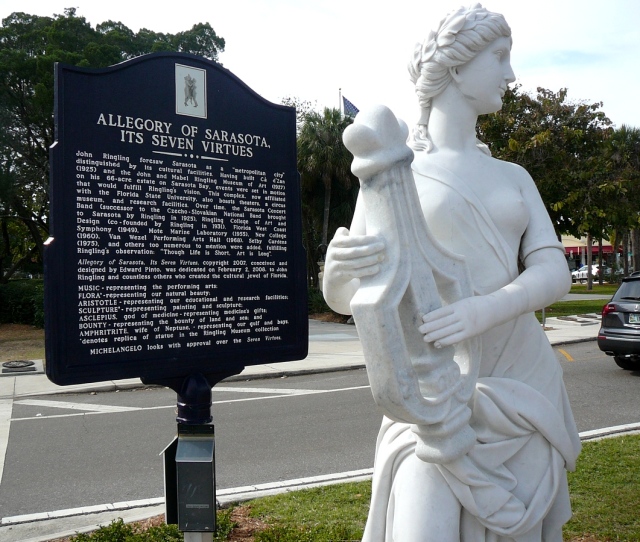 Everywhere in Sarasota There Is Art

Most of all, few cities the size of Sarasota has the vibrant environment of the arts whether it is theater, art, motion pictures, music, or anything creative.  The waterfront Van Wezel Hall with its purple shade hosts the big traveling shows, but local talent abounds in this community.

The Florida Studio Theatre (1973) in downtown Sarasota isn’t just a stage at 1241 North Palm Avenue, it is a village of theaters – the historic Keating and Gompertz Theatres, the European-style Goldstein and John C. Court Cabarets, and the Bowne’s Lab Theater.  The FST has over 30,000 subscribers, making it the third largest subscription theatre in the United States.

FST’s Mainstage Series has produced 33 world premieres and 89 regional premieres.   The Cabaret Series has 40 world premieres to its list.  Stage III hosts the annual Sarasota Improv Festival.  But the most impressive program to me is the “Write A Play” celebration in its 26th year.  School kids across Florida from grades Kindergarten to 12th grade write original plays and the winners get to see them in production.  Over a million Florida children have participated or have seen these plays.

There are enormous turn-outs in Sarasota County for every event in the arts and the town has thus attracted more than its share of artists, writers, actors, and show people.  I remember years ago going with my father, a newspaper editor in nearby Charlotte County, to an arts meeting in downtown Sarasota and seated next to us was mystery writer John D. MacDonald and Pulitzer Prize winner MacKinlay Kantor.

Despite the town’s size, the Sarasota Opera is in its 59th season at the 1926 Edwards Theater (now the Sarasota Opera House).  Also downtown is the Jazz Club of Sarasota which was founded in 1980 by Benny Goodman’s publicist Hal Davis.  The Club runs fifty events every year, including the Annual Sarasota Jazz Festival which attracts visitors from across the globe.

The Ringling complex contains the Asolo Repetory Theatre (Florida’s largest Equity theater) and Florida State University’s MFA Acting Conservatory.  Not only does the center have a huge stage; there is the 1798 original Asolo, Italy, theater, and the 1900 Dunfermline Opera House built right into the complex.  You can say Sarasota’s arts are very international!

The Asolo complex is home to the Sarasota Ballet which produced 141 separate ballets last year, including many original works.

The Sarasota Sculpture Center (SSC) sponsors the Sarasota Season of Sculpture where the downtown area of the waterfront has showcased 140 sculptures representing 18 states and 13 foreign countries.  The amazing Embracing Our Differences exhibit, with its 45 giant billboards, attracted  271,000 visitors.

Asolo Has All Kinds of Historic Theaters

Sarasota has always appreciated all the creative arts.  Sarasota High School operates the Sailor Circus Academy and performs routines that you would expect on a big stage in Las Vegas. Very unique is McCurdy’s Comedy Theater and Humor Institute.  Their Green Room is a traditional comedy club often hosting famous TV comedy acts.  The Politically Correct Comedy, the Stand-Up Comedy Boot Camp, and the Kids Komedy Kamp has turned hundreds of locals into comedy performers.

Most reflective of how Sarasota treats the arts as a gathering for all its residents, Les McCurdy started in 2005 Special O’Laughics, a workshop that teaches mentally challenged adults the art of stand-up and sketch comedy.  When it comes to the creative arts, Sarasota is truly a “City of the Arts.”