The Most Dangerous Natural Thing To Fear In Florida

I know people in various parts of this nation who won’t visit Florida because Florida is a dangerous place.  Some of these people just don’t want to leave their home for a week or two.  Others have unrealistic fears like the lady who didn’t want to go to Florida because we have hurricanes.  She lived in Oklahoma City.  I should have asked her how many days does the local weather man give when a tornado is approaching your area so you can seek the best shelter.

We do have natural things in Florida that both visitors and Floridians need to recognize. Afterall, eighty percent of our new residents come from another state (60%) or another country (20%).   So what should you fear? 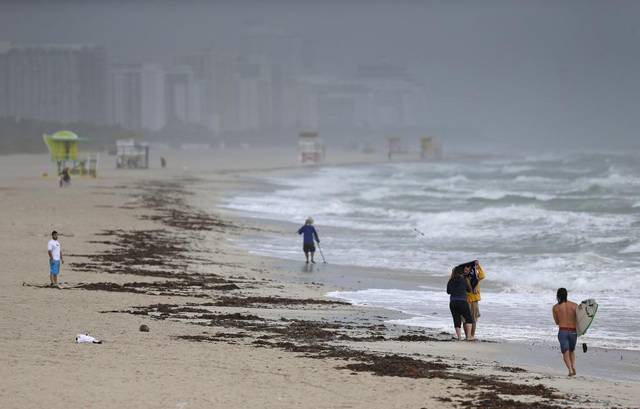 Miami Before A Big One

HURRICANES:   Ask people from other states what they fear about Florida and many will say “hurricanes.”  Most Floridians know that living next to the beach may mean packing up the automobile and hoping your house is still standing when you return, but I find that safer than living on a California earthquake fault line.

Hurricanes have always played a big part in Florida history.  The 2017 Hurricane Season has just started here in Florida.  Oddly most people associate hurricanes with Florida’s summer months, but Florida’s biggest storms have come in September.   The September 19, 1559 storm that destroyed Tristan de Luna’s attempt to build a colony in Pensacola Bay was probably a hurricane.   The Florida Land Boom truly ended with the September 18, 1926, storm and two years later in September 16-18, 1928, a hurricane killed 2,500 people or more, when Lake Okeechobee became a thirty foot tidal wave sixty miles from any ocean.  Thanks to modern weather forecasting most causalities of Florida hurricanes are people who did not obey evacuation orders.

SHARKS:  Florida is the “shark bite” capital of the world, but globally there are only 98 shark attacks reported each year with an average of six fatalities.  We humans kill between 30 and 100 million sharks per year so it is a good thing no shark is reading this book.  Florida has more shark attacks than California and Australia for we have relative warmer water and swimmers in huge numbers all year around.

HEAT and HUMIDITY:    Visitors always tell me they couldn’t live in Florida in the summer because of our high humidity.  We don’t hide the fact that Florida has a humid subtropical climate.  Appropriately, a Florida doctor John Gorrie is noted as the first inventor of air conditioning way back in the 1851.  The good news is that when there is sweltering summer heat we head to our oceans, lakes, and rivers with nice breezes.    Gainesville (74.4%) is our most humid city but it ranks only 67th of all US cities with 50,000 or more people.  It should be noted that when there is a huge national heat wave it is people in the slums of New York, Chicago, and Detroit who are dying.  Floridians have fans if they have no air conditioning. 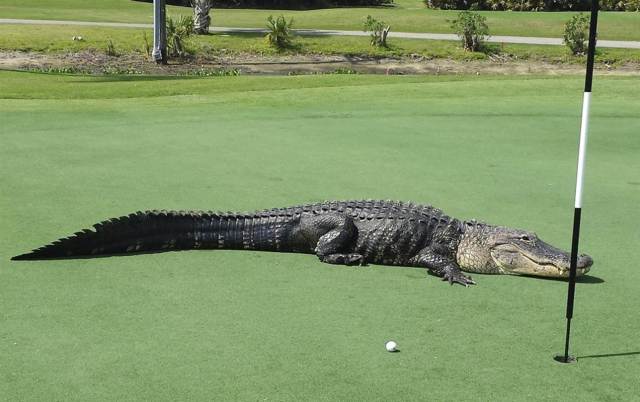 “I Wonder If He’s Going To Concede The Hole?”

ALLIGATORS:   Gators are twice as likely to eat you in Florida than sharks.  The death of a two year old boy at the Grand Floridian Resort at Walt Disney World created global headlines.  A tourist family on vacation from gator-less Nebraska hardly expected an alligator in the middle of a huge resort, but most Floridians know male alligators during mating season from April to June are more aggressive, will roam across busy highways and golf courses let alone vacation parks, hunt at night for food, and even ignore their natural fear of humans.   Fortunately 95% of those attacked by gators escape or at least those are the percentages of the people we know were attacked.

Considering the fact Florida has 20 million people and 1.25 million alligators, it may shock you there have been just 24 alligator deaths since 1973.  Most years incidents of gator bites number less than a dozen.   To improve these odds, I highly recommend: never feed any alligators, never swim at night in any freshwater Florida lake or river, and never wander off a swampy trail into tall grass.  Few alligators have practiced the act of jumping up at people in trees like the performing alligators at Florida zoos, but it is good to know that alligators can move faster than you for thirty yards.

LIGHTNING:  Now here is a Florida danger that tourists forget.  Central Florida between Tampa and Daytona Beach is the “lightning capital of the USA.”  Lightning is more fatal than hurricanes since we now can predict the latter days before the latter’s arrival. Since 1953 hurricanes have killed 216 people in Florida, but lightning has killed 468 people.  82% of all those struck by lighting are male because golf, fishing, and boating are the major activities of people while getting hit by lightning.  What makes lighting so dangerous in Florida is that it often precedes the arrival of rain by several miles.  If you see a dark cloud coming toward you in the distance, get out of the water or the open field and head for cover. 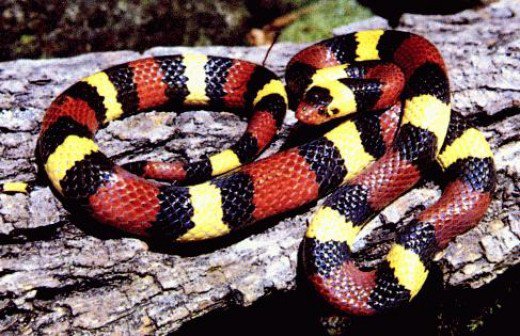 CORAL SNAKES and RATTLESNAKES:  Florida is a warm place so it is home to lots of undesirable snakes.  In the last five years there were 42 snake bites in populous Southeast Florida – 21 by water moccasins, 11 from coral snakes, 3 from pigmy rattlesnakes, 2 from eastern diamondback rattlesnakes, and 5 unknown.  No one died.  Most were camping or fishing in a rural location.  I discovered there were no coral snake deaths or Florida deaths in the last ten years and all the USA deaths were by rattlesnakes, mostly in rural areas of the Western United States.  It was then that I realized Florida is quite urban and access to a hospital with anti-snake venom explains why few people will die of snake bites in Florida.  Now don’t take this as a suggestion to run barefoot through a field of tall grass or stick your hand in a hole in the earth.

BAD BUGS:  People who fear bugs are not likely to love Florida.  There is a reason that some bug men here drive a Lexus.  Visitors don’t want to hear about scorpions and black widow spiders.  We have three of the former and two types of the latter.  Florida scorpions can not deliver a fatal sting.  The spiders are more painful.   People who leave their backyards with debris or put their garden gloves and sneakers on an open back porch are giving these little creatures a place to nap until nightfall.  GOOD NEWS: I have never seen a live scorpion in my fifty plus years in Florida.

If you are on a hot Florida beach at noon and you feel a sharp bite on the back of your neck, don’t blame mosquitoes.  Those nasty long-legged uglies rarely attack in warm sunlight.  Mosquitoes are just one of three blood-sucking flies that can ruin your day.  Lousy biting midges, also known as sand flies or no-seeums do attack people, but mainly hit at dusk and dawn.  The probable bad insect in this case is the stable fly (or dog fly), a light colored house fly that likes to dive bomb people even on warm days.  If you see these guys around you, pick another spot on the beach.

But the most dangerous thing you will probably face on a summer Florida vacation is SUNSHINE.  Florida is closer to the equator than any other state other than Hawaii and people underestimate the power of the Florida sun.  The bad news is all those collegians baking away all day on a Florida beach will not know how much danger they are in until several decades later.  And the whole danger can be drastically reduced with a regular splash or spray.