Florida’s Performing Arts Scene Is Not All Imported Shows

Posted on February 12, 2018 by floridatraveler

Barbara and I attended the second annual Walt Disney World International Festival of the Arts and I must confess watching top Broadway singers like Ashley Brown (Broadway’s original Mary Poppins) and Josh Strickland (original Broadway Tarzan) do the best Disney songs  is a real treat.

Brown and Strickland Do Disney Well

So many of the singers and bands that used to do the Disney Flower Power and Food Festival shows have retired or sadly like Davy Jones and Paul Revere passed on to a new place.  Unless they had several hits I don’t remember many of the 1980’s groups now performing at these freebie WDW shows.

Looking at the crowds of tourists and locals, it made be wonder how many people think Florida’s performing arts scene, is mainly winter concerts by visiting groups.  Not too long ago that was the image of Florida – when the wealthy winter people leave for Europe or the mountains, the theaters and galleries close up.

That is not at all true, but people may still get that impression since the most advertising for the arts they see on TV and the Internet is for the traveling Broadway shows and star entertainers at places like the Carol Morsani Hall (2,600 seats) at Tampa’s Straz Performing Arts complex or the 2,400 seat Ballet Opera House at the Adienne Arsht Center in Miami.

The Straz: An Example of Florida’s Support for the Arts

In reality the Straz has four other smaller theaters, the Tampa Opera Company, and 20 practice studios.  The Arsht has two vast theaters and a pedestrian walk that even straddles Biscayne Boulevard.  More towns are finding the arts brings in more money than constructing a baseball park.

Every major urban center has a performing arts high school.   In Tampa, where I live, it is Blake High downtown across the Hillsborough River from the Straz.  Florida colleges have 22 theater schools, 11 music programs, and 7 dance programs, with my college Florida State University hosting 25 programs and scoring a Five Star Rating in the performing arts.

Jacksonville’s Jacoby Hall Is Concerts Only

When I arrived in Florida in the 1960’s Florida orchestras were few in number and their annual programs were usually less than the strings on a viola.   Now in its 50th season the Florida Orchestra in Tampa performs over 100 concerts in three venues.  The Orlando Philharmonic Orchestra has the largest endowment of any arts group in Central Florida.

The Jacksonville Symphony Orchestra has its own concert hall in the 1,700 seat Robert E. Jacoby Hall.  The home of the Artis Naples Philharmonic contains two great performance halls and a fine arts museum.  There is even the Beethoven Sympathy Orchestra in tiny Key West.

Home of the Sarasota Opera Company

Florida has sixteen opera companies.  The Florida Grand Opera performing at Miami’s Ziff Ballet Opera House and the Au Rene Theater in Fort Lauderdale is now the seventh oldest opera in the USA.   The amazing Sarasota Opera company turned the old Edwards Theater into their domain.

There are few towns in the United States the size of Sarasota with such an extensive and highly ranked reputation for the performing arts.  The Ringling complex not only includes the world famous State Ringling Art Museum, but it is the home for the multi-theater Florida State University Center for Performing Arts. 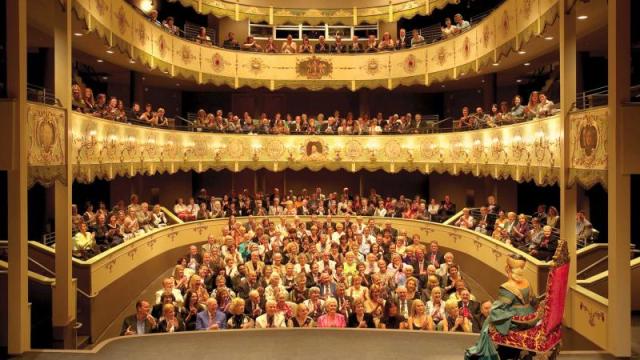 Although it is only used for special events, my favorite site at Ringling is the historic 1798 Asolo Theater, built in Italy, and reassembled on the Florida West Coast.  Watching anything here is like entering a wonderful time machine.

Sarasota, of course, has a Sarasota Ballet which under the leadership of Iain Webb has produced 36 world premieres.  Its dance company has 56 dancers selected from around the world.  There are fourteen other residence dance companies in Florida, not counting colleges and high schools and dancing schools.

The performing arts area perhaps effected adversely the most in the world of big budget Broadway visitors, popular music concerts, and fairs has been smaller drama companies, who fight for Florida’s entertainment time and money. I particularly have been impressed with the cooperation of stage companies from Jupiter to Key West in Southeast Florida to promote their activities.

If you are a resident or a tourist you can see what is happening in Southeast stage performances at the South Florida Theatre League and Florida Theater On Stage websites. They do a great job showcasing Florida theatre groups.