Snorkeling In Florida Is A Recreation Bonanza For All Ages

Posted on August 26, 2018 by floridatraveler

I never appreciated snorkeling when I was a kid and scuba diving seemed an impossibility to be with my poor eyesight.  Ironically, now after cataract surgery I can see underwater as an old coot better than when I was in grade school.

Still, I am not attracted to going two miles offshore to a Florida Keys reef where the waters are five to fifty feet; I’d stick as close to the five foot edge as I could.  Diving down into the deep is not my bag so I need to mention places off the beach.

That’s why this article is not telling you about advanced snorkeling sites and too many places where you have to take a long boat trip to your destination.  Plus, people should realize Florida’s clear spring rivers are filled with great fish and manatees, and there are many safe snorkeling spots where alligators don’t line the shoreline.

Here are some neat spots to snorkel in Florida:

You don’t have to go to the Florida Keys to see the third largest barrier reef system in the world for its starts just south of Miami’s Key Biscayne with forty islands (keys), nine reefs, and five shipwrecks to explore, many with near shore snorkeling environments in hard-bottom coral communities.

Experts suggest Caesar Creek Sandwich Cove as a nice shallow area with hard bottom coral colonies, and Bell Buoy Reef which does require a snorkeling boat trip.   Look at a map of the underwater Park and you realize it is a giant, protected bay.

John D. Pennekamp Coral Reef State Park is a famous place for scuba and snorkeling and Carysfort is in the northern tip, popular with many Key Largo snorkeling firms.  This one is a boat trip to a mature reef with depths of 5 to 25 feet.

Carysfort was a 118-foot British frigate that hit the reef in 1770 and is six miles off North Key Largo.  As the ocean level rises the island that once held the lighthouse becomes a larger shallow snorkel area.

Pigeon Key and Bahia Honda are two islands where the snorkeling is done right off the beach.  While the latter, a state park with campsites is more famous, the snorkeling program at exotic Pigeon Key covers adults to small kids.

Located on the south side of the urban island from the end of DuVal Street to the White Street pier, the Key West Marine Park has 116 mooting buoys marking the near coastal reef.

Experts pick the remnants of the old White Street bridge (Higgs Beach) and the Dog Beach area at Vernon Street as the best entry points to the reef.   They remind people don’t grab any spiny lobsters in the off-season.

Most people think that you have to go to the Florida Keys to find a large snorkeling area that has clear waters and loads of interesting fish.  You can walk off the beach at these spots.

Located on Hutchinson Island on the Atlantic Ocean, the Bathtub is a honeycomb worm reef that diverts the surf making a more protected bay for snorkeling.  It is a good experience even for amateur and child snorkelers while experienced people can go over the reef walls into deeper water.

The design of the Gulf of Mexico beaches limits visibility in Florida, but there are still spots like South Venice Beach that are fun snorkeling spots.  The best Point of Rocks on the south side of popular Siesta Key, voted by many as the whitest sand in the USA.

This is a mostly residential area but there are access points and it is a short southward walk from Turtle Beach (half way south on the island).  A long row of outcroppings protect fish from large attackers.

Florida’s river springs are popular snorkeling places so if you look up the Florida State Parks to see if scuba is allowed – snorkeling will also be allowed.

Scuba Diving Magazine lists this huge multi-=spring site as one of the top 25 snorkeling areas in the world.  It is famous for swimming near manatees and the water is mild all year. 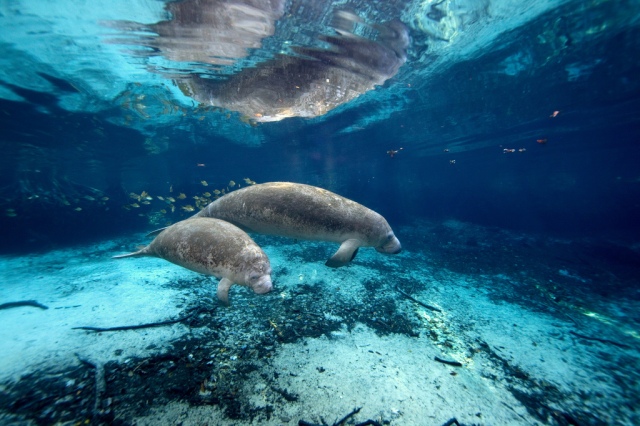 The Three Sister Springs area attracts the most winter manatees and there are several tour firms that specialize in snorkeling programs.

The same tour people also operate thirty miles south in Homosassa Springs famous for its State Park on US19.   Snorkeling here is equally interesting for besides manatees, both saltwater and freshwater fish mix freely in this wide river.

Snorkel off the East Jetty in Panhandle Destin

So consider a snorkeling trip as part of your outdoor Florida experiences.