Posted on February 16, 2014 by floridatraveler 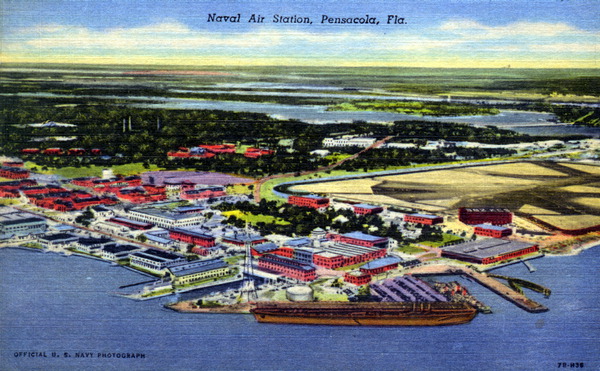 In October 1913, Secretary of Navy Josephus Daniels organized a board to develop an aeronautical option for the U.S. Navy. To Captain Washington Irving Chambers, the biggest booster of naval aviation, Florida was the logical choice for air training – the first commercial air flights were just happening in Tampa, Florida.

Pensacola, with its huge Bay, was selected for the first naval aviation center. When the USA entered WWI in April of 1917, Pensacola was still the only training field. The station started with 38 naval aviators, 163 enlisted ground personnel, and 54 fixed wing aircraft.

Pensacola remained the major training field in WWII. The Navy even trained Doolittle’s Raiders to take off from carriers in the Bay. The jets came in 1954 and Pensacola trained the pilots who went to Korea, Vietnam, and the Middle East.

There was concern of the fate of the base when Hurricane Ivan scored a direct hit on the facilities in 2004. But Pensacola continues to produce pilots who go on to great careers like John Glenn and Neil Armstrong.

Historian and travel writer M. C. Bob Leonard makes the Sunshine State his home base. Besides serving as content editor for several textbook publishers and as an Emeritus college professor, he moderates the FHIC at www.floridahistory.org
View all posts by floridatraveler →
This entry was posted in florida history and tagged aviation, Florida history, mcbobleonard, military base, Pensacola, US military, US Navy. Bookmark the permalink.