The War For The Best Cuban Sandwich Gets Hotter

Posted on February 25, 2014 by floridatraveler 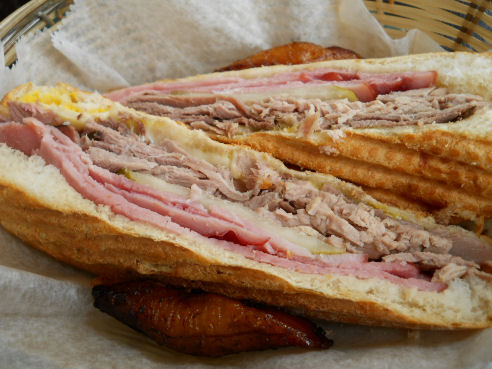 March has been proclaimed Cuban Sandwich month by Tampa Mayor Bob Buckhorn and the Third Annual Cuban Sandwich Festival will be held in Ybor City’s Heritage Park on March 22 and 23. This is a SuperBowl event.

Living in Tampa for 45 years means I have seen a lot of Cuban sandwich contests sponsored by the local newspapers and radio stations. Tampa’s Cuban population came in 1885 with the cigar industry and they also brought most of the popular Cuban sandwich ingredients.

People take their Cuban sandwiches seriously and a victory by a small restaurant or bakery means a big boost in business. With the Cuban population spread out to West Tampa, Town and Country, and elsewhere, every area of town has its sandwich favorite places.

The Cuban has/has not changed as Cuban food spread across the land with the huge Cuban migration to Miami starting in the 1960’s. There are now categories of Cubans with the most serious being Traditional (mustard only) and Non-Traditional (Mayo). I love mayo but I WILL NOT put it in on a Cuban! Pressed Cubans are best – it is an art form.

For the last two years the Cuban restaurants and bakeries of Miami and South Florida have challenged Tampa so this contest is now one of regional pride. Down in South Florida there is a semi-finals in Hialeah on March 15 to send the best people to the Tampa festival.

This Cuban sandwich thing is getting serious. The big winners, I think, will be the thousands who come to the Festival to eat Florida’s creations.

Historian and travel writer M. C. Bob Leonard makes the Sunshine State his home base. Besides serving as content editor for several textbook publishers and as an Emeritus college professor, he moderates the FHIC at www.floridahistory.org
View all posts by floridatraveler →
This entry was posted in florida history and tagged Cuban sandwich, Florida food, Florida history, mcbobleonard, Tampa, Ybor City. Bookmark the permalink.