Posted on December 1, 2014 by floridatraveler

We are entering the last months of the 150th anniversary of the American Civil War with just a few events for me to later add next year.  Since most Floridians don’t have Sunshine roots, here are some things you probably don’t know about Florida and the Civil War.

1. The Civil War would have started at Pensacola’s Fort Pickens (drawing) if not for Fort Sumter in Charleston Harbor.  Unlike the latter, the Confederacy couldn’t seize Ft Pickens so Pensacola Bay was blocked by the Union during the War. 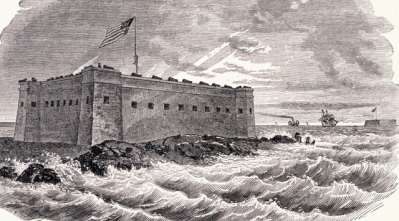 2. When Florida joined the Confederacy, Key West with its Northerners, Conchs, and Cubans remained loyal to the Union.  Fort Taylor was always a base of the Union blockade.

3. Florida’s only Confederate Cabinet member Stephen Mallory, Secretary of the Navy, made one of his first orders to NOT protect Florida’s monstrous 8,000 mile coastline since the Rebels lacked ships and cannons.

4. In 1860 Florida was the least populated Confederate state, but the state sent 15,000 soldiers out of a male white population of c. 40,000 to the Civil War.  Try comparing that with larger states for percentages.

5. Florida was so far South of the main Civil War fronts most of the 15,000 local troops were sent to Virginia, Tennessee, and out West, leaving local units, wounded vets, and nearby Georgians to protect Florida.  Even given one week furloughs, Florida troops couldn’t legally go home and return in time.

6. Florida’s most popular Civil War hero never commanded more than 220 troops. Colonel J. J. Dickison (photograph) operated a fast-moving cavalry who moved from Cedar Key on the Gulf to the St. Johns River on the Atlantic, halting Union invasions.  He became known as “the Swamp Fox of the Confederacy.” 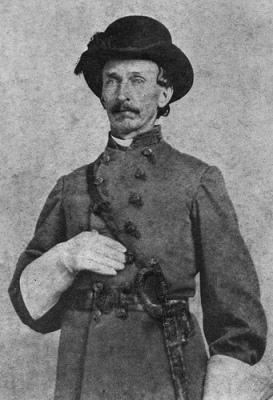 7. Florida Governor John Milton was so upset with the way Confederate leaders in Richmond were treating Florida troops and civilians in demands, he went to his plantation Sylvania in Two Egg, Florida, and killed himself.

8. Tallahassee was the only Confederate capital east of the Mississippi River not to be attacked by Union troops.  It was, however,  raided by Confederate deserters.

9. Confederate Secretary of Treasury Judah P. Benjamin escaped through Florida to Cuba and then England while dressed as a woman.  His last American address was the Gamble Mansion in Ellenton.

10.  Harriet Beecher Stowe, who wrote Uncle Tom’s Cabin, built a house in Mandarin, Florida, on the St Johns River when the war ended.  One day while doing her wash in the backyard, a river steamer came by on the way to Palatka.  The passengers all waved to her, including General Robert E. Lee.

Historian and travel writer M. C. Bob Leonard makes the Sunshine State his home base. Besides serving as content editor for several textbook publishers and as an Emeritus college professor, he moderates the FHIC at www.floridahistory.org
View all posts by floridatraveler →
This entry was posted in florida history and tagged civil war, civil war enactments, Harriet Beecher Stowe, Robert E. Lee, Wierd Florida. Bookmark the permalink.