Posted on August 31, 2015 by floridatraveler

Key West for many generations has been a popular winter refuge and even hiding place for some of America’s greatest writers, poets, and artists.  For that reason, I was curious when a friend told me that a house where Tennessee Williams, the great playwright, lived, was on the market, I got curious.

The one-story Bahamian style cottage at 1431 Duncan Street was recently sold for $1.15 million, a pretty figure for a 1933 wooden three bedroom 2.5 bath site. I would have been better off renting William’s old bedroom on the sixth floor of what is now the Crown Playa La Concha hotel.

Talking to people in Key West has convinced me that the life style on the island is so casual that sometimes communication about things gets a little dated. Houses evidentially sell quickly on this island, usually without much publicity of ownership.

I was next informed that the massive seven beds, five bath house at 709 Baker Lane, once owned by James Leo Herlihy was for sale.  He wrote Midnight Cowboy and Season of the Witch and wed as his third wife Laurie Buffett, sister of Jimmy Buffet.  I heard it was once a great party house, but it just sold for $3.8 million dollars and is off the market.

The house at 416 Elizabeth Street was also now Off The Market.  It belonged to Tom McGuane who wrote 92 In The Shade and such great screenplays as The Missouri Breaks and Tom Horn.   It seemed that many famous Key West writers lived in simple houses until I saw the price tags on the properties. 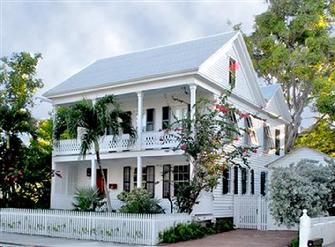 John Dos Passos, novelist of The 42nd Parallel and Nineteen Nineteen, lived at 1401 Pine Street in a 1938 house where I could even see the backyard patio where he once did his writing.

The Backyard Courtyard of the John Dos Passos House

The last house I was told was for sale was no longer on the market.  It was the cute cottage of Elizabeth Bishop, Poet Laureate of the USA, at 624 White Street.  The 1933 one bedroom house still featured a historic plaque.