Posted on September 7, 2015 by floridatraveler

Winter Park is identified across Central Florida as an upscale community filled with a downtown of attractive stores and restaurants along Park Avenue, glamorous lakeside estates, and Florida’s first four-year college, ROLLINS COLLEGE.

Winter Park has lots of sightseeing options; this town has ( C on MAP) SCENIC BOAT TOURS since many of the lakes are linked by canala and many of the beautiful estates are on the water. After touring the shops on Park Avenue (complete with Amtrak station so we once came here for the day from Tampa by train), tour the beautiful ROLLINS COLLEGE campus where being lakeside makes a difference.

The mix of education, money, and Northern money gives the town a prosperous atmosphere, one that can support the world’s largest Tiffany glass collection at the CHARLES HOSMER MORSE MUSEUM of AMERICAN ART.

The area has attracted New Englanders in large numbers since the 1880s, although pioneer David Mize Jr. started Lake View (later Osceola) in 1858 for Southern farmers. When the South Florida Railroad reached the area in 1880 it brought Loring Chase.  When he saw the lovely lakes, he recruited a rich New England Oliver E, Chapman to buy land and plant orange groves around a downtown.

By 1885 Chase and Chapman sold the property to a group of investors who opened the Winter Park Company with an eye to turn the town into a winter residence of the rich. Later that year the Congregational Assembly selected the town for ROLLINS COLLEGE and the huge Seminole Hotel was built on Lake Osceola to attract the rich.

On campus is the (ROLLINS on map) CORNELL FINES ARTS MUSEUM (1942), the original site of the Morse Art Gallery, and the exquisite ANNIE RUSSELL THEATRE (1932), A Romanesque classic by O. W. Hessler and Richard Kiekael.

If you are renting a canoe or traveling on Lake Virginia to get scenic views of the Rollins Campus, you should notice the houses on the south shore, a subdivision called Ellno Villa. (13) At 247 Virginia Drive is the 1925 Spanish style W. B. JOINER HOUSE ; at 181 Virginia is the 1928 HERBERT HALVERSTADT HOUSE. He was Mayor of the city while his wife Gertrude was President of the Woman’s Club. 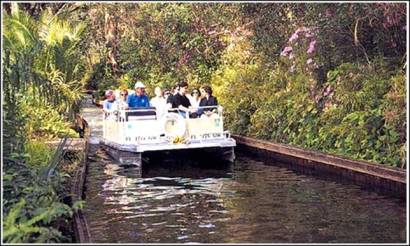 Traveling from the Rollins campus east on Osceola it is hard to miss (B) the ALBEN POLASEK MUSEUM  at 633 Osceola. It is the house where the great Czech artist/sculptor retired in 1950, but the grounds and building houses a great display of his work. 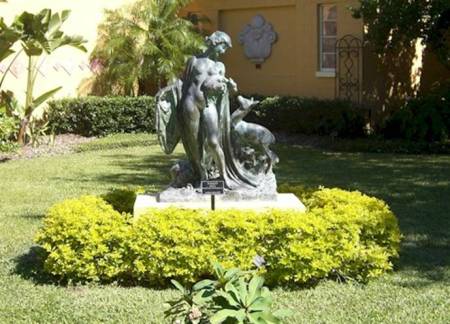 It is much easier to miss (1) the REV. CHARLES W. WARD COTTAGE (1882) purchased by Alonzo Rollins from the town’s first Episcopal minister to serve as the first women’s dorm at Rollins.  I do not know if Alice Guild stayed here, but she was the first woman in Florida in get a BA from a Florida college in 1890.

North of Osceola on the eastern shore of Lake Osceola is (2) THE PALMS (1898), a 21 room Georgian Revival complete with boathouse and pagoda and a favorite on the Boat Tours. Edward Hill Brewer, a winter resident built the house. Later noted architect James Gamble Rogers II redid the interior for another owner. 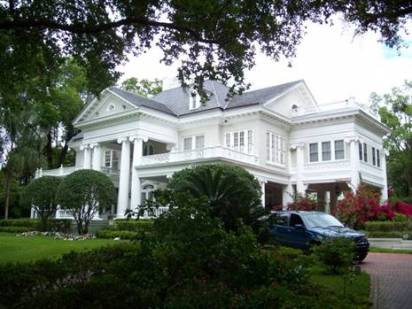 The front of THE PALMS doesn’t show the lake. 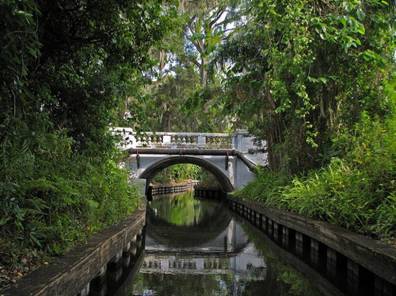 Several older estates in this area are (6) CARLOVA (1914) at 181 Interlacken Avenue. The English Tudor was named by Dr. H. W. Caldwell in honor of the three states where he lived: Carolina, Ohio, and Virginia. Noted architect James Gamble Rogers II also did much of this structure. At 701 Via Bella is (7) WESTOGUE (1882), one of the oldest in this area.

A more popular spot is (8) the ANNIE RUSSELL HOUSE (1926) at 1420 Tuscany. The house was built by Judge Leonard J. Haekney but in 1929 noted English actress Annie Russell came to town and stayed to become a great promoter of the arts in Central Florida.

Nearby at 1461 Tuscany is a favorite on tours: (9) SANDSCOVE (1918) the Georgia Revival classic of Yankee winter resident James Stokes.

On Alabama Drive on the southern slopes of Lake Maitland is an odd sight: (12) the ALABAMA HOTEL (1921), saved from destruction by conversion into condominiums. On the grounds is the TEMPLE REFLECTORY (1904), a summer kitchen built by original property owner W. C. Temple and now converted into a clubhouse.

At 1700 Alabama Drive is the 1873 WILLIAM C. TEMPLE HOUSE. Temple, a successful Pittsburgh businessman, was one of the starters of the Pittsburgh Pirates baseball team and developer of a World Series. One winter at his orange groves, he noted a strain that survived the frost better :today we call it the Temple orange.

Historian and travel writer M. C. Bob Leonard makes the Sunshine State his home base. Besides serving as content editor for several textbook publishers and as an Emeritus college professor, he moderates the FHIC at www.floridahistory.org
View all posts by floridatraveler →
This entry was posted in florida history and tagged architecture, Florida, homes, orlando, Rollins, tours, winterpark. Bookmark the permalink.