Posted on October 12, 2015 by floridatraveler

BROOKSVILLE, located 50 miles north of Tampa, is a wonderful city of hills, ranging in elevation from 175 to 274 feet. Coupled with its condensed area (2.77 square miles) and its long history of successful planters, growers, and cattlemen, Brooksville is more a reflection of “the Old South” than other West Coast towns. Its Southern background is reflected in its name, honoring South Carolina Congressman Preston Brooks who is best noted for hitting abolitionist Senator Charles Sumner on the head with Sumner’s cane.

WHERE TO START: You can reach  Brooksville from the east off I-75 or from the south on US41 (BROAD STREET)

Just past Lemon Street, you’ll notice on FIRST METHODIST CHURCH, 109 South Broad which was organized in 1891.

CROSS ORANGE, unless you wish to take a short detour north on Orange to the JOHN J. HALE HOUSE (A), a 3-story 1888 frame house owned by a merchant and railroad trustee. Note how the breezeway that once separated the kitchen is enclosed.

At 31 Broad is the PRESBYTERIAN CHURCH BUILDING, converted in 1947 by Henry Carlton Sr. into new location for his grocery founded in 1910.  Up the road at 120 Broad is the DIXIE THEATER (1926), where the only talkies are businessmen doing commerce.

The next intersection is the center of Brooksville. At 1 Main Street is the FIRST NATIONAL BANK (1910), a two-story brick structure with its original cast iron columns.  On the south-side of Broad you should see the massive wall mural of “The Brooksville Raid” by Antonio Caparello.  The walls of buildings in Brooksville have several neat historic murals in the downtown area.

In the northeast corner stands the HERNANDO COUNTY COURTHOUSE (1913), a rectangular Classical Revival brick edifice designed by William A. Edwards, complete with Ionic columns. Despite two major additions over the years, the courthouse has remained one of the most photographed public buildings in Florida.

TURN LEFT (north) ON MAIN STREET (called Howell above Broad). At 115 North Main is R.R. DINGLE DEPARTMENT STORE (1912), one of the early large firms. CROSS JEFFERSON STREET. On your left is BACON’S DRUGS (1926) and on your right the notable HERNANDO STATE BANK (1905), where J. A. Jennings was first President.

At 115 North Howell is WEEKS HARDWARE (1913), a two-story brick owned by John Weeks, first President of the First Federal Bank. Across the street is the J. M. ROGERS DEPARTMENT STORE (1912), 120 North Howell.

CROSS FORT DADE. On the right you can stop and get more local information at the CHAMBER OF COMMERCE . 101 Ft. Dade Avenue, or at the nearby  1950  FREDERICK EUGENE LYKES JR LIBRARY, a great resource for local history..

As you go north the road curves and becomes Howell.  At 201 Howell is the 1970 CITY HALL.  At 253 North Howell (Howell) is the W. A. FULTON HOUSE (1880), a lovely 2-story double verandah home of the organizer of the Florida Citrus Exchange. Look carefully to see where the dog trot design once existed.  At 307 Howell is the TANGERINE PLACE (1925), a mission style hotel where in 1931 City Attorney Herbert Smithson was gunned down by rum-runners. Across the street at 310 Howell is the 1905 ROY CLEF HOUSE a lovely Colonial Revival.

Brooksville’s residential streets are lined with interesting buildings and often covered by huge oak trees. If you are driving you might want to go block by block as far as Bell Avenue, where the OLD HERNANDO HIGH (1925) is located.

If walking, I would but skip tree-lined IRENE (you can see it later) and TURN RIGHT ON OLIVE STREET. At 61 Olive is the ST ANTH CATHOLIC CHURCH (1908). nicely converted into a cool, private dwelling. (I wonder if there is a church cemetery in back.) At 48 Olive is the most noted Brooksville home, the residence of GOVERNOR WILLIAM SHERMAN JENNINGS  (1880). The three-story frame house has a wonderful octagonal bay tower and is in fine condition. Jennings was Governor in 1900 and his wife May Mann, a leader for women’s rights, started the Florida League of Women’s Voters.

GO DOWN BROADWAY and turn into IRENE where you’ll love the old road and the W.E. LAW HOUSE (1890) a Colonial Revival at 58 Irene.  The backside of the larger Olive Street houses shows some old barns.

RETURN TO MAIN STREET, heading south past the Courthouse. At the southeast corner at 2 Broad Street is   the J. A. JENNINGS BUILDING (1915), a two-story brick vernacular started by the city’s first clerk (1880). South Main has a lot of older commercial buildings including the 1885 GRIMSLEY COUNTRY STORE BUILDING, at 100 S. Main. At 131 South Main is the 1931 BROOKSVILLE WOMAN’S CLUB

TURN RIGHT ON EARLY and drive to BROOKSVILLE/MAGNOLIA. TURN RIGHT to see the fine OWEN WHITEHURST HOUSE (1896), 321 South Brooksville, a two-story double veranda house. TURN AROUND GOING ORTH ON BROOKSVILLE to 133 South Brooksville and the COOGLER HOUSE (1910). Theodore Coogler came from South Carolina as an early settler. Colonel F. B. Coogler was the town’s first treasurer (1880).

YOU’LL NEED YOUR CAR TO DRIVE EAST ON LIBERTY:  At Liberty and Saxon Avenue is the once famous: ROGER’S CHRISTMAS HOUSE where. Mary Roger’s Christmas gift shop once attracted visitors for miles around when in 1972 she turned a bookstore into a popular Christmas store complex.  The store closed in 2014 but her legacy to Brooksville will be remembered.  Next door is the 1864 FRANK SAXON HOMESTEAD, a Queen Anne Revival restored by Mrs. Rogers.

YOU MUST VISIT the HERITAGE MUSEUM, 601 Museum Court at 600 West Jefferson, located in the 1850 Stringer House, a Queen Anne masterpiece with a four-story tower. F. L. Stringer was a State Senator and judge.

CHINSEGUT HILL, located five miles north off US41 by Lake Lindsey is worth the drive. Colonel Byrd Pearson of Columbia, South Carolina, founded the plantation. His daughter wed Governor Francis P. Fleming. Colonel Raymond Robins, social economist and Progressive Party leader, owned the estate for years and donated 2,000 acres to the State. Today University of South Florida uses the mansion for private retreats, but the exterior of the house ion a hill is beautiful. 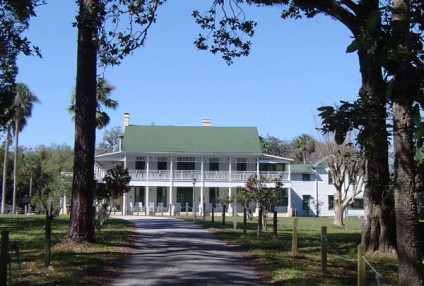 Historian and travel writer M. C. Bob Leonard makes the Sunshine State his home base. Besides serving as content editor for several textbook publishers and as an Emeritus college professor, he moderates the FHIC at www.floridahistory.org
View all posts by floridatraveler →
This entry was posted in florida history and tagged brooksville, Florida, Florida history, florida tours, Florida vacations, mcbobleonard. Bookmark the permalink.