Posted on March 2, 2016 by floridatraveler

Despite the boom in Naples, Florida, and the fact that Cape Coral is southwest Florida’s largest town, FORT MYERS, “the City of Light” is still the center of Southwest Florida.

FORT MYERS, started in the 1840’s when a hurricane forced the evacuation of Seminole War Fort Dulaney at the mouth of the Caloosahatchee. First Lt. John Harvie found a safe place for a fort, which was named FORT MYERS in honor of Seminole War hero Colonel Abraham C. Myers. While retired soldiers built homes along the River, it was cattlemen like Jake Summerlin and Captain James McKay, using the river to ship cows to Cuba, that developed the town in the  1860’s and 1870’s. 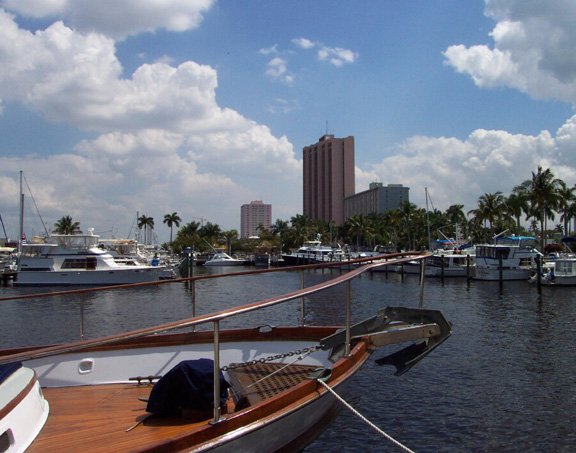 Still, at the time of incorporation in 1885, there were just 349 citizens, waiting for the arrival of the railroad and Northern visitors like Thomas Alva Edison.  Edison would give the frontier city lights and a future as a tourist center.

START: PARK to walk or DRIVE from the FORT MYERS CHAMBER OF COMMERCE at 2310 Edwards Drive (941-332-3624) by the waterfront. To the northeast you’ll see the site of the (1) THOMAS EDISON BRIDGE (1931), spanning the Caloosahatchee River on what is now Alternate US41 with the massive high-rise bridge to the left taking US41. Ironically when Florida Governor Doyle Carlton opened the concrete structure on Edison’s 84th birthday, it lacked electric lights.

To your left is another Lee County landmark, the: (2) FORT MYERS CIVIC CENTER (1943), on the end of Hendry Street. The one-story complex was a favorite with World War II troops.  There is a new convention complex down the road.

GO ONE BLOCK EASTWARD and TURN SOUTH ON JACKSON STREET, PASS BAY STREET, and unless you are in a hurry turn left to see three old downtown residences: At 2466 First Street, the (3) WALTER LANGFORD HOUSE (1919), a red brick and white masonry bungalow with two hip dormers and four full story dormers. Across the street in the next block is the: (4) JOHN MURPHY-BURROUGHS HOUSE (1892), 2505 First Street, an outstanding Victorian house with a three sided verandah and a widow’s walk. This Murphy-Burroughs House is a popular local attraction.

At 2581 First Street is the Queen Anne (5) HEITMAN HOUSE (1908), with another widow’s walk and a circular verandah. TURN AROUND AND RETURN WEST ON FIRST STREET. On the northeast corner of First and Bay is the: (6) FIRST BUILDING (1920),1301 First Street, known to many as the Bank of Fort Myers.

On the southeast corner is the (7) REGENCY HOUSE (1910), 2320 First Street. CONTINUE DOWN FIRST PAST JACKSON STREET.

At 2258 First Street is the (8) EARNHARDT BUILDING (1915), a fine brick structure with elaborate trim and spiral scrolls at the cornice. Across the street at 2221 First Street is the (9) PATIO DE LEON (1913), one of the many commercial buildings, including four hotels, by retired Michigan financier Peter Tonnelier.

Across the street is the (11) EDISON THEATER (1920), 1533 Hendry Street, opened by John Hendry whose first theater started in 1908. ONE BLOCK DOWN is the: (12) R. O. RICHARDS BUILDING (PYTHIAN BUILDING) (1923), 1615 Hendry Street, started with Royal Palm Pharmacy and designed by Tampan Fred J. James. Richards, President of the state pharmacy board, was instrumental in getting Connie Mack and the Philadelphia Athletics to come to Fort Myers in 1924.

At 1625 Hendry Street is the (13) ROBB & STUCKY BUILDING (1924), a four-story Neo-Classical which was the start of a large furniture firm. . TURN RIGHT ON SECOND STREET. At 2253 Second Street is the (14) ANDREW GWYNEE INSTITUTE (1911), founded by a Memphis cotton broker who wanted to boost local education. Nearby is the Lee County School offices.

TURN RIGHT ON BROADWAY and go north one block to Marion Street. You won’t miss on your left the: (16) LEE COUNTY COURTHOUSE (1915), 2120 Main Street, a Doric two- story temple.

CROSS MAIN STREET and continue to the: (17) HENRY COLQUITT BUILDING (1925), northwest corner of Main and Broadway, built by the former Detroit realtor who owned the Caloosahatchee Bridge Company.

GET YOUR AUTOMOBILE IF WALKING and go WEST ON MAIN STREET until it becomes McGregor Boulevard, a route ofFort Myers Beach, famous for its Royal palms. The street is lined with older houses and stores including the 1925 FRANKLIN MILLS BUILDING, a Mediterranean Revival arcade built by the founder of the famous laboratory.

The street leads to the: (20) THOMAS EDISON WINTER HOUSE (1886), 2341 McGregor Boulevard, the great inventor’s cold months residence from 1886 to his death in 1927. “SEMINOLE LODGE” is a two story frame house with a connecting guest house. The original carbon filament light bulbs that Edison installed are still operating. His winter laboratory, his vast tropical garden collections, and his bamboo swimming pool show that Edison’s mind never slowed. The Edison Museum is a treasure house of inventions including every automobile his winter neighbor Henry Ford ever gave him.