When May comes around in Florida, the snow birds and high rollers have departed and most of the automobile tourists are waiting for the kids to finish schools.  It is a time of year when vacationers can often avoid high prices and crowded summer beaches.

Palm Beach is a nice place to visit this time of year.  You can actually get a decent table at the island’s fancier restaurants and some of the most glamorous resorts are offering special deals.

The arrival in the 1890’s of the railroad of Henry Flagler opened up Palm Beach to the world  and hotels like the monstrous Royal Poinsettia and Whitehall became the winter playgrounds for the Victorian rich.  Yet it wasn’t until the Florida Land Boom and the Mediterranean Revival architecture of Addison Mizner that Palm Beach became the winter domain and hideaway of the very rich. 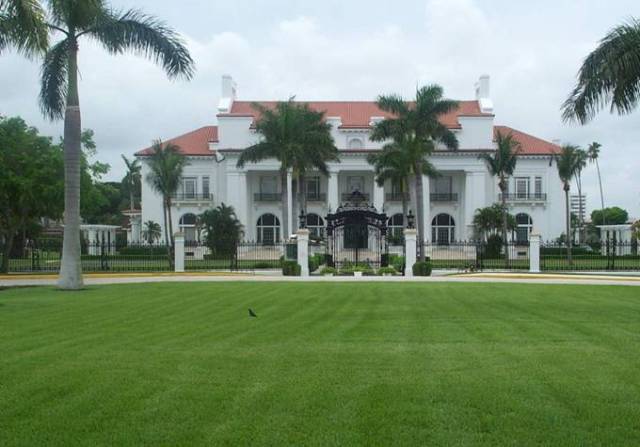 Flagler’s wooden Whitehall fell to the termites and his private railroad car complete with gold toilet fixtures is the only thing on the Whitehall Resort property.  Flagler’s legacy stands with The Breakers, now the 1926 version.  One May in the 1960’s I took a group of high school students to a convention here in the 1960’s and while the students attended meetings, I took off to the empty pool for a morning dip.

There was an elderly man having breakfast by the pool and he signaled me to join him. It turned out he was John D. MacArthur, one of the richest men in the world.  Things like this happen in Palm Beach.

The Florida Land Boom was the next great era for Palm Beach.  It was an age when great architects like Addison Mizner and Joseph Urban did their magic with Mediterranean Revival styling of fancy mansions, commercial districts, and public buildings.  The result: Palm Beach is today an architect’s dream spot.

When the streets and roads are less crowded downtown Palm Beach is a nicely compacted district with great buildings.  Two of my favorite ones are the 1926 Palm Beach City Hall

and the 1927 Paramount Theater designed by  Joseph Urban.

Perhaps today the greatest contribution to Florida architecture since everyone can enjoy it is the Worth Avenue shopping district with its share of Mizner buildings and neat alleyways.  Whether you can afford any of the merchandise or not, you love the atmosphere and recognize how upscale Florida shopping centers have tried to capture the Palm Beach look in their design.

I took this Worth Avenue photo at 10 am Saturday morning

I love to visit historical areas early to take photographs that are not crowded with tourists and automobiles.  One morning in Palm Beach I entered a music shop and found myself one of only two customers.  The other person was Rod Stewart.

Be sure to visit all the narrow alleyway streets off Worth Avenue for they house some delightful shops, offices, and even a few places to grab a casual meal.

1 Response to Palm Beach Is A Great Summer Vacation Spot