Posted on June 6, 2016 by floridatraveler

The craft beer industry has boomed in Florida in the last years, even in the Panhandle.

Vicente Martinez Ybor not only brought the cigar industry to Tampa (Ybor City) in 1885. he constructed Florida’s first brewing company (1897), the Florida Brewing Company, on the Government Spring used by the soldiers of Fort Brooke.  It dominated beer sales for many generations in Florida since Northern brews were poorly distributed.

The next year Teddy Roosevelt and his Rough Riders partied at the brewery. The six-story business remained Ybor City’s tallest enterprise until it closed in 1961.

CCB’s taproom and plant is in West Tampa on Spruce Street, while their brewpub is up Dale Mabry Highway in Carrollwood.  You can even visit their bar at Tampa International Airport.  Today  young people in Tampa only think  Jai Alai is a beer in a bottle.

There are too many nifty craft breweries to mention even a small percentage of them in this article, but here are some of our favorites across the Sunshine State.

Over in Pinellas County in Dunedin is the Dunedin Brewery, Florida’s oldest craft brewery and besides crafting 15 barrels at a time and giving tours, the place hosts local bands and social events.   The cool interior, good food, great entertainment, and classy service remain high points here.

Dunedin is a small town with a lot of fine pubs.

It may seem odd a Florida brewery is producing award winning selections like Snowed In (Stout) and Last Snow (American Porter), but the Funky Buddha Brewery in Oakland Park is probably the most innovative brewery in Florida. 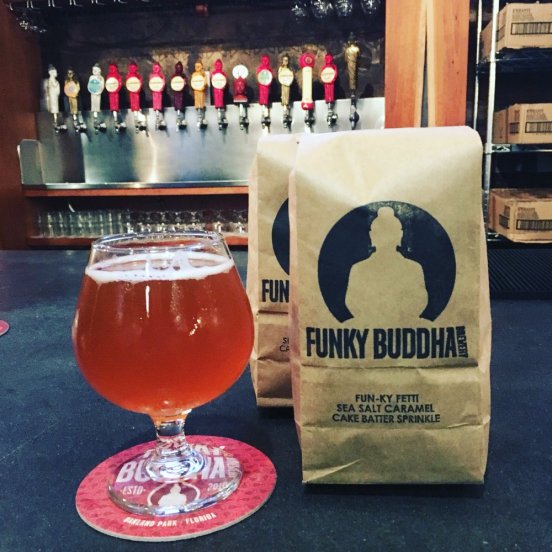 This brewery has probably won more serious craft beer competitions than any other brewery in Florida.  This is a place for serious beer drinkers.

A special tribune goes to Miami’s first craft brewery, the Wynwood Brewing Company, for they had to fight half of the city and its zoning laws to get the business in Dade County. They also renovated an old garment warehouse, an important part of the birth of the Wynwood Art District.

The funkiest brewery is the Swamp Head Brewery serving Gainesville. The quality of their beers, despite names like Wild Night and Big Nose, less I forget Cottonmouth and Saison du Swamp, attracts droves of Florida coeds and beer-thirsty locals.  It is the only brewhouse I have ever seen with outdoor tanks.

The people of Gainesville can’t miss this advertisement.

Green Room Brewing on Jacksonville Beach may be beachside casual, dogs allowed, and BYOF (that’s food), but it also has sixteen taps rotating as many seasonal and regular brews.  But, I’m not sure I want a Barleywine called Undertow.

The Panhandle has been adding craft breweries from Tallahassee to the Alabama State Line, but we give our hats off the Grayton Beer Company on Santa Rosa Beach.  They know their beer and have good food, and have a warehouse game-room that even meant kids had a good time.

Craft beer has become such a key entertainment and food industry that visitors don’t have far to look for a brewery.  Beerinflorida.com  and floridacraftbeerfinder.com will show you the nearest place and their specialties.