Posted on August 1, 2016 by floridatraveler

PASS-A-GRILLE BEACH, the Southernmost of Pinellas County’s barrier beaches, was the first beach community on the Gulf of Mexico to develop as a weekend residential spot for successful Tampa and St. Petersburg residents. Originally, home to fishermen, homesteaders, and lumber men like Zephaniah Phillips, the island opened up when Roy S. Hanna and Tampa cigar magnate Selwyn Morey started in the 1880’s to develop lots for houses and hotels and a ferry service.  The completion of a bridge from the mainland came twenty years later.

Merged with St. Petersburg Beach since 1957, Pass-A-Grille maintains its arty and bohemian life style, in part, because the village is but one block wide and 31 blocks long. There are restaurants on the Intracoastal Waterway and the Gulf of Mexico.

WHERE TO START: The island is ideal for walkers if you PARK AT THE SOUTH END OF GULF WAY by the beach. DRIVERS would appreciate the weekdays when you can loop around the narrow roads.

DRIVE EAST ON FIRST AVENUE toward Pass-A-Grille Channel to see how condos and apartments now block the point. Only 103 First Avenue, a two story frame with an old metal stove chimney is an early house. (1) LANDS END is a cottage colony at the very tip of Pass-A-Grille with a view toward the mouth of Tampa Bay. The island to the south is Fort DeSoto Park.

TURN LEFT ON THIRD AVENUE. All the cottages on your left predate 1925, including the (3) DR. EDMUND MELVILE HOUSE(1906), 104 Third Avenue, a two story that was moved from the Point to make way for apartments. At 110 Third Avenue was the (4)THOMAS WATSON COTTAGE SITE, the winter home of Thomas Watson, co-inventor of the telephone.

TURN RIGHT ON GULF and then RIGHT ON FOURTH AVENUE.

On your left is the (5) HOTEL CASTLE (1906) one of the older beach establishments and an unusual style of a beach colony. On your right is the (6) FIRST SCHOOLHOUSE (1912) , 105 Fourth Avenue, a one room school, now a residence. Across the street lived William Staub, editor of the St. Petersburg Times (111 Fourth) .

The next four houses on your left are fine older homes. The first one is the (8) WALDRON HOUSE (1910), 400 Pass-A-Grille, with a wonderful stone fence and cement yard.

TURN LEFT ON FIFTH AVENUE where old cottages line both sides. The first house on your left is the (9) CAPTAIN RANDON MILES HOUSE (1900), 102 Fifth Avenue, one of the island’s oldest, complete with fluted chimney. The last house on the left is the (11) JAMES SIMMONS HOUSE (1911), 108 Fifth Avenue, a big waterfront owned by the New York Congressman.  Babe Ruth was wintered here in a long gone cottage.

TURN RIGHT ON GULF and right on SIXTH AVENUE. This entire block is mostly 1920’s cottages. The last house on the left stands where Zephaniah Phillips  built his saw mill in 1884.

TURN LEFT ON PASS-A-GRILLE and LEFT ON SEVENTH.

TURN RIGHT ON GULF WAY and RIGHT ON EIGHTH AVENUE, downtown Pass-A- Grille.  The two story buildings with their open or enclosed second floor porches give downtown a frontier look except at 111 Eighth, a delightfully tiny pink storefront advertising “psychotherapy.” A block away is the towering HURRICANE RESTAURANT, where people drive for miles for a grouper sandwich and a sunset. 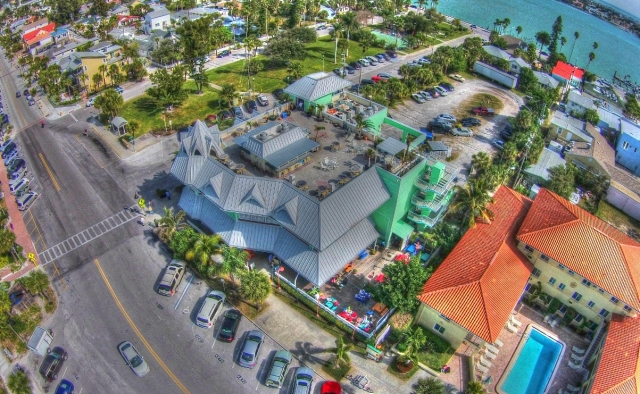 The Rooftop at Hurricane Restaurant Is A Party Spot

TURN LEFT ON PASS-A-GRILLE and LEFT on one-way NINTH AVENUE.

On your right is the Pass-A-Grille Park. On your left at 808 Pass-A-Grille is the (20) JUDGE L. S. SCHWERDTFEBER HOUSE (JEWETT VILLA)(1908), a big house with three dormers. The Seaside Grille Pavilion across Gulf Way along the public beach continues a tradition started in 1905 by Charles S. Page who opened a beachside snack bar. This postcard of the PASSA-GRILLE HOTEL AND CASINO is dated 1921.
TURN RIGHT ON GULF WAY and RIGHT ON TENTH AVENUE.

The Museum Once A Church

TURN LEFT ON PASS-A-GRILLE past the 1910 Mac Granger House at 1002 Pass-A-Grille, and TURN LEFT ON ELEVENTH AVENUE. At 109 Eleventh Avenue is the delightful (24) CHARLES BEINERT COTTAGE, (1921), better known as the “Staten Island Cottage.” 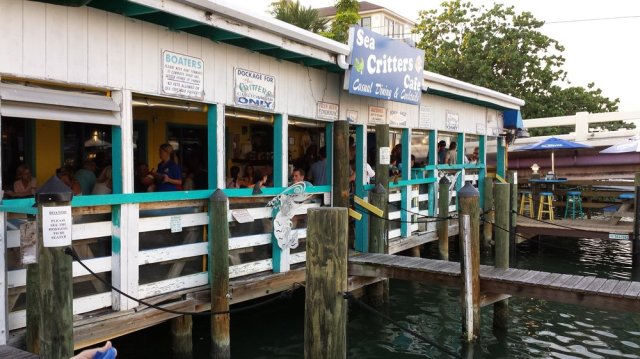 Sea Critters Restaurant Over the Waterway

This ends of the original Pass-A-Grille district. At 113 Twelfth Street is the (25) VASHTI BARLETTE COTTAGE (1918) and at 1202 Pass-A-Grille Way is the (26) HAROLD McPHERSON HOUSE.  Film fans might want to travel north to the yellow cottage at 1805 Pass-A-Grille, the 1927 home of movie actress Norman Talmadge.