It was not until well into the twentieth century that Florida had the urban population and economy to bolster its own literary marketplace.  For decades most Florida writers were snowbirds, who found places like Saint Augustine and Key West warm and inspirational winter hideaways.  That has been changing in the last fifty years as Florida has developed a literary heritage.

Cross Creek, south of Gainesville, is almost synonymous with the home of Florida’s most beloved author Marjorie Kinnon Rawlings, Pulitzer winner for The Yearling.  This simple farm house, its barn, and grounds tells the story of life in the 1930’s in rural Florida with its colorful Crackers and Northern visitors.

A Trip To Cross Creek Is A Trip Into Her Novels

You should spend time at the nearby land and walk the small estate.  The barn uncovers a lot of ancient treasures and there are some priceless photo ops like the old Rawlings automobile and her old typewriter sitting on the porch.

In a more urban setting is Ernest Hemingway’s Key West home at 907 Whitehead Street.  The two storied  French Colonial house was built in 1851 savage wrecker Asa Tift and with an elevation of sixteen feet is safe from recent street flooding. Here Hemingway wrote To Have And To Have Not and Green Hills of Africa.

The Hemingway House Is Rustic Yet Neat

The tour of the house is a fascinating look at the author and Key West’s laid back lifestyle, although the island’s first indoor plumbing and the pool, a real luxury.  Everyone looks for the descendants of Hemingway’s cats and you can’t miss them – they are all over protected like rare species.

Down the street at 1431 Duncan Street is the winter home of Hemingway’s pal Tennessee Williams.  TW actually wrote A Streetcar Named Desire when he lived in the nearby La Concha Inn.

In a simple cottage at 3744 Stewart Avenue in the ancient Coconut Grove section of Miami is the home of “the Mother of the Everglades” Marjory Stoneman Douglas (1890-1998).  Her The Everglades – River of Grass is the most famous ecology book in Florida history.

The Queen of the Everglades at her humble Cottage.

Most people identify Jack Kerouac with San Francisco, but he did the rewrite of On The Road and finished The Dharma Bums in a little bungalow at 1418 Clouser Avenue in the College Park section of North Orlando.  The house now houses young writers in residence.  Kerouac later lived in Saint Petersburg but that is a private house.

Most fans of Zora Hurston visit Eatonville, the African-American town just north of Orlando, where she grew up.  Unfortunately, the homes in Their Eyes Were Watching God are gone, but there is a Hurston Museum and her father’s church.  At 1734 School Court in Fort Pierce is her last home and a Dust Track Trail leads to the Hurston Library and the Garden of Heavenly Rest Cemetery with her grave.

Saint Augustine is loaded with literary spots.  Hurston lived in a apartment at 791 King Street where she finished her autobiography and taught at a local college.  The strange Ripley Believe or Not Museum was once owned as a luxury hotel (Castle Warden) by Marjorie Rawling’s husband and that third floor penthouse was meant to be her urban home. 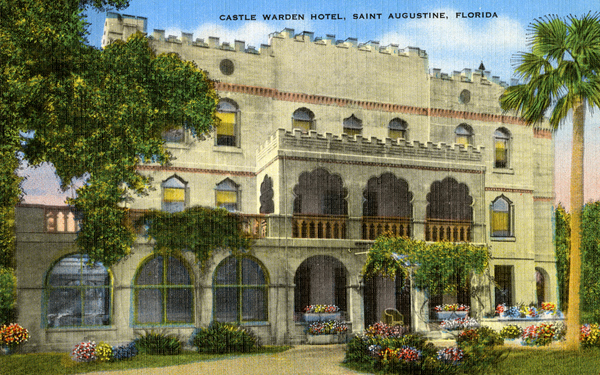 Rawlings Hated the Place so Stayed on Crescent Beach

She hated it for the entire town visited her so she usually stayed at her beach house.  One weekend she let her friend stay in the penthouse and the woman died in a hotel fire.  Her ghost is one event that Ripley won’t advertise.

If you are a writer and plan to spent some time at work in Saint Augustine, may I suggest the historic St Francis Inn.  Avoid the third floor (old attic) unless you want to meet a ghost of the son of a Confederate General who committed suicide when his romance to a black servant was revealed.

If Only the St. Francis Inn Could Tell Us Its History

Van Wyck Brooks finished The Flowering of New England in the back cottage and won a Pulitzer Prize.  A few years later Edith Pope used the table for Colcorton and she was nominated for a Pulitzer.  Dozens of novels and articles were written in St Francis.