Posted on April 4, 2017 by floridatraveler

Animals have always been big business in Florida.  Walt Disney World has Animal Kingdom to compete against Tampa’s Busch Gardens.  Sea animals have their place at Sea World while there are six other dolphin playgrounds.

Lion Country Safari started in Palm Beach County in 1967 was the first drive-through animal preserve and today people not only want to get as close to the wildlife as possible, in some cases they want to interact with them whether they are porpoises or giraffes.

No Convertibles At Lion Country Safari

Major cities like Miami (MetroZoo), Tampa (Lowry Park), Jacksonville Zoo are successful traditional animal zoos.  We can include the numerous alligator farms and tropical bird stops in another category.

Several of Florida’s old wildlife attractions have become state-owned operations such as Silver Springs, Homosassa Springs, and Wakulla Springs.  Many of the old animals are living out their life now under public supervision.

Less known but growing in importance are Florida’s wildlife parks and refuges that emphasize preservation and rehabilitation and education of endangered and deserted animals.  The animals are not likely to perform shows taught to them by trainers.

The biggest trend in animal centers have been in small somewhat niche training areas.

My favorite is Big Cat Safari here in Tampa.   This is an accredited sanctuary for exotic cats saved from abusive roadside zoos, bankrupt carnivals, and backyard breeders. 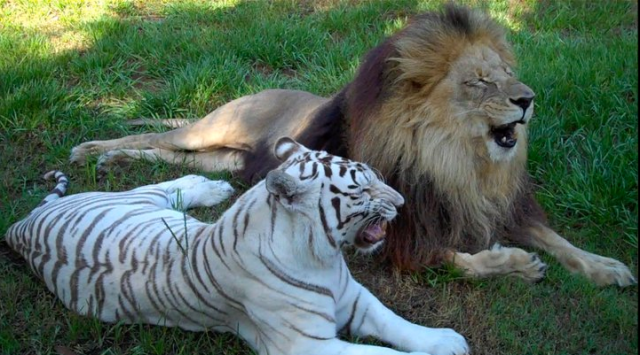 It Can Be Boring Waiting For Dinner

Lions, tigers, cougars, bobcats and more fill the 80-acre habitat.  Big Cat also rescues and rehabilitates and releases Florida bobcats.  Visitation is expensive and limited at these sanctuaries since there is no desire to flood the facilities with tourists.

Forty-five miles further north in North Dade City is the Giraffe Ranch, home to not just giraffes but other African grazing animals.  You can the herds by vehicle, Segways, or even camels.  Other options include walking llamas and feeding ring-tailed lemurs.

To Take A Camel Ride To See Giraffes

The Endangered Animal Rescue Sanctuary in Citra, ten miles north of Ocala in FL318 East, is a forever home to lions, ligers, tigers, and bears.  Membership is required to take a tour and like most of these places, people make reservations since visitation is limited and scheduled.

Down in Naples Nancy and Kert Smith operate Shy Wolf Sanctuary and their residences not only include a huge pack of wolves and wolf dogs, but also dingos, cougars, and even prairie dogs.  Their program mainly goes to clubs and schools to educate people about wolves but they require a great deal of volunteers and helpers.

Don’t Expect me To Jump Thru A Hoop