Posted on August 3, 2017 by floridatraveler

In the summer months the Panhandle beaches from Pensacola to Panama City are crowded with vacationers from Alabama and Georgia.  The highways are sometimes resembles South Florida and the restaurants and hotels are filled.

Summer doesn’t seem to offset the relative peaceful calm of Florida’s Forgotten Coast – that section of the Gulf of Mexico from St. Marks to Port St. Joe.  This is Florida with an emphasis on natural attractions and small, friendly towns, and outdoor activities like hiking, fishing, and boating.  The coastline does not have great beaches but two of Florida’s best beaches are on St. George Island and the St. Joseph Peninsula. 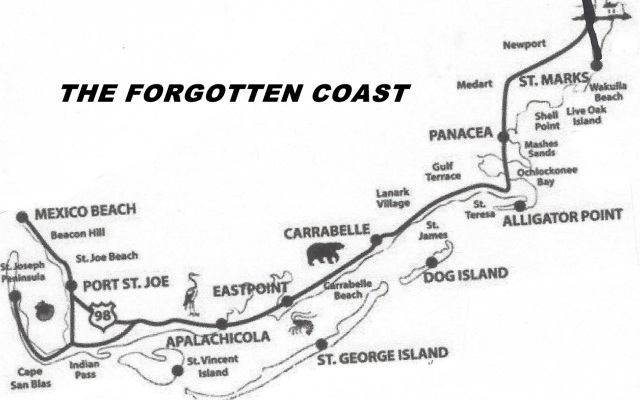 The most common route for people in peninsular Florida is to start in Tallahassee and head southward toward the Gulf of Mexico and St. Marks on FL 363, the route of Florida’s first and long-gone railroad.  There are two attractions worth a stop. The Ed Ball Wakulla Springs State Park, off  363 via Fl 267 to FL 61, is one of the world’s largest and clearest springs famous since the days of the Creature from the Black Lagoon   There are boat tours and swimming and 1937 27 room Wakulla Springs Lodge built for tycoon Ed Ball.

For history buffs there is another sight east off Natural Bridge Road: the Natural Bridge Battlefield Historic Site where in 1865 in Florida’s second largest battle the Confederacy halted an attempt to capture Tallahassee.

At the end of FL 363 is the still-functioning St. Marks Lighthouse (1831) constructed in part with materials from the ruins of nearby San Marcos de Apalache Historic Site, where there is a museum telling the story of this site going back to the Spanish.  Backtrack to US 98 and head west along the coastline.

If it’s near lunch time the small family seafood restaurants have been serving travelers for decades. Panacea has several old-fashioned family seafood places.  The larger town of Carrabelle is famous for having the world’s smallest police station.  Look for a phone booth with police emblems.

Panacea Might Have More Seafood Spots Than Traffic Lights

Carrabelle is where there is a ferry to Dog Island, a small isolated spot made famous a few years ago when several guys ran fake articles that the place was a retirement and vacation spot for dogs.  It was funny until people actually started showing up thinking it was a dog resort.  It has a nice beach, but you should head to the bridge for St. George Island.

Half of this island is State Park and campers fight for spots by one of Florida’s most lovely island beaches.  There is a St. George Inn here and some rustic stores. 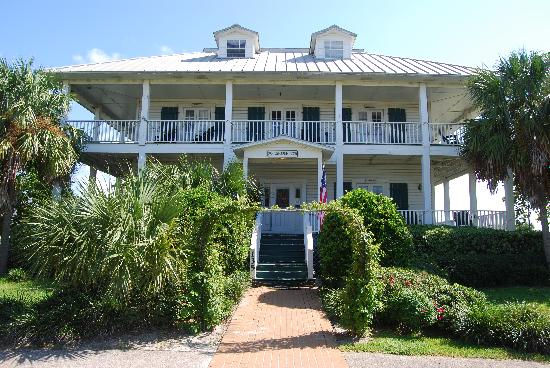 Apalachicola, at the mouth of the large Apalachicola River, is famous as an oyster and fishing port, but it was a historic center for trade even before the Civil War.  There are lots of lovely Victorian houses, a neat downtown that will shock you, and several key spots. The John Gorrie State Museum is where a Florida physician trying to keep yellow fever patients alive developed one of the earliest air-conditioning systems.  Nearby is the 1839 Trinity Episcopal Church that is an incredible pre-fab first assembled in New York before shipment to Florida.  There are several neat bed and breakfast places in Apalachicola, like the famous 1907 Gibson Inn, not far from the Maritime Museum.

Continuing westward on US-98 , people looking for an incredibly long white beach and recreational facilities should drive onto the St. Joseph Peninsula and Cape Blas and look at St Joseph Peninsular State Park with a beach and park which has been selected best in the nation by TripAdvisor.  Unfortunately, the summer is a big season here.

The tiny town of Port St. Joe has the nearby Florida Constitutional Convention Museum Historic State Park, where in 1838 Florida’s first State Constitution was passed.  The village of St. Joseph almost became the state capital until a hurricane leveled the town.

You can drive north on FL-71 to get back to I-10 or continue west toward Panama City and the developed beach cities of the Florida Panhandle.