Marco Island and Goodland Have Survived The Wrath of Hurricane Irma

Posted on October 5, 2017 by floridatraveler

Hurrican Irma arrived at mainland Florida at the island community of Marco Island and a fishing village of Goodland.  While there was extensive damage, particularly to the coastal facilities it looks like most of the area will soon be ready for the great influx of winter tourists and snowbirds.

As An Island Filled With Waterways, Marco Island Survived Irma

MARCO ISLAND , the site of a famous archaeological expedition in 1895, is a six by four mile island at the southwest corner of Florida. It has seen a lot of storm but taking a direct hit by Irma tested the endurance of the area.

Fishing and farming dominated Marco Island life even after 1870 when Captain W. T. Collier and his son William D. Collier of Tennessee arrived in their schooner Robert E. Lee.

Downed Vegetation and Flooding Were The Main Problems

In 1922 New York advertising executive Barron Collier (no relation) brought his Fort Myers to Southern Railroad to Marco Island and a few hotels were built.  It was not until after World War II when developers like the Mackle Brothers turned most of the pristine tropical island into an upscale retirement community and resort, with a maze of canals and roadways. There is little of the wilderness left on Marco Island although the island is still surrounded by the hundreds of virgin islands great for exploring, fishing, and boating.

WHERE TO START: One usually enters Marco Island from the north and in winter there are ninety minute trolley tours will give newcomers a good look at the developments. Sadly there is little of physical buildings of historic note to see the local historical group does a good job of erecting historic signs, but this makes a tour even more disturbing to a historian like myself.

If you drive west on Capri Boulevard to the (1) ISLES OF CAPRI, you’ll see the remains of a quaint fishing village which most of the area resembled prior to the 1950’s.

On the island, at 1102 North Collier is the (2) MARCO CHAMBER OF COMMERCE , which has brochures and often a historic display.

The north end of Marco Island contains the last remnants of the fishing community, including (3) MARCO ISLAND CEMETERY where the graves of pioneers like the first Colliers reside. I like the tropical remains of the northern tip of Marcos Island more than the crowded beachfront.

The SNOOK INN has survived and will open to the thrill of winter visitors.  They might see that the docks required repair.  In fact, boats and docks seem to be the most damaged items on the island.

Marco Island Landmarks Like the Snook Inn Are Being Repaired

The Northern tip also contains the (4) W. D.COLLIER HOUSE, on North Bald Eagle, not far from the site of Olde Marco Ferry Landing, which brought in visitors from 1920 to 1938. The Village School (1889) was located at this spot. At 100 Palm Street is the (5) OLDE MARCO INN(1883), a restaurant occupying part of W. D. Collier’s Inn and Victorian sections converted inbto suites with complete kitchens.

Return to Collier Drive, head west to the Gulf of Mexico. A good diversion is (6) TIGERTAIL BEACH, off Seaview Circle. It is the only large public beach on Marco Island, but it is lovely tropical setting.

Traveling south on Collier, you will pass condominiums and large resort hotels. Except for extensive damage to vetegation, they seem in good shape. At the tip of Collier is (7) POINT MARCO, with a good view of the thousands of coastal islands stretching into the Everglades.

Drive east on Winterberry and then right on Inlet Drive. On your left is the (9) SITE OF THE CAXAMBAS CLAM FACTORY (1904), off Osceola Court and (10) INDIAN HILL CALUSA MOUND. Not much of the fifty foot site where the Cazambras School survived huricanessurvived civilization. 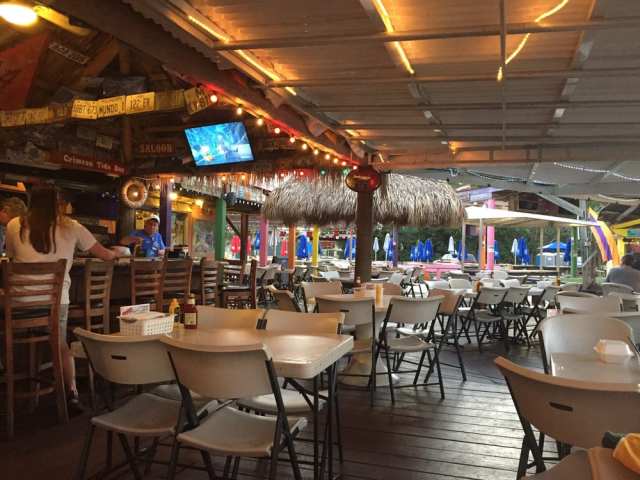 Returning to Barfield Road you’ll pass the (12) SITE OF THE PINEAPPLE PLANTATION and if you continue westward, you’d reach (13) GOODLAND, a small fishing town with a good mix of old buildings and seafood restaurants which I’m sure people feared might be destroyed.

Goodland took the most direct hit of Irma and the storm damaged the popular waterfront.  STAN’S IDLE HOUSE survived and is being reopened although the fish house looks in worse shape.  People around here have lived with many a bad storm and will rebuilt the fishing industry.

Closed thanks to Irma repairs is the LITTLE BAR & RESTAURANT whose main dining room is the interior of the Star of the Everglades, a boat used in movies and by Presidents Truman and Eisenhower to tour the Everglades.

Going northward on Barfield Drive, it is heavily residential with (14) THE ESTATES, rows of large mansions off the road. Off Inlet Drive is the (15) GEORGE YOKE ESTATE, an early estate whose stone fence angered the neighborhood. Before you return to FL 951, you’ll pass the Marcos Island Golf and Country Club with its (16) ISLAND CLUB.

By November most of Marco island and Goodland will be ready for the prime winter season.