US27: The Old Alternate Route To Miami

Posted on January 30, 2017 by floridatraveler

Most people from the Northeast heading to Miami or the Keys simply take I-95 along the Atlantic Ocean.  Those coming from the Midwest usually leave I-75 at the Florida Turnpike and slice across Florida through Orlando.

Before the development of Interstates you had to drive through the crowded coastal towns on US1 on the East Coast or US41 on the Gulf Coast.  Unless you wanted to avoid all the vacation traffic and go down the middle of the state on US27.  That route has built up like the rest of Florida, but even today it gives you another taste of Florida – a more Old Florida, small town feel.

If you head south off I-4 on US 27 (Exit 55), you are just minutes from Walt Disney World and the congestion of booming metropolitan.  You realize new gated communities are springing up, advertising how many minutes they are from the Mouse.   At Haines City (US 17) you pass over the Railroad Line used by Amtrak’s Silver Star and Silver Meteor and maybe soon Florida’s Super Train.

quarter-cloverleaf interchanges on the southeast and northwest corners of the bridge over Interstate 4  at Exit 55.  At FL 540 you realize LEGOLAND FLORIDA is just four miles to the east.  If you’re an old person like be you remember the lakeside area as the site of Cypress Gardens, perhaps Florida’s first all natural attraction.  If you have small kids, Legoland is for you with a wild hotel, water park, rides, and restaurants.

The Legoland Hotel Is Not All Legos

Further south US27 becomes a six-lane divided super-highway for you are entering a region of South Central Florida Lakes and a booming snowbird population.  At FL60 you reach LAKE WALES with its beautiful Bok Tower seated on the tallest hill in peninsular Florida.  Its gardens and ponds are worth a visit.  Spook Hill, an optical illusion of rolling up a hill, is still a popular stop as is a look at downtown Lake Wales.

Going southward, you realize the Central Highlands of rolling hills are vanishing, but the area is dotted with attractive small lakes for fishing and boating.  If you want to retire to Florida and don’t like the more costly coastal cities, this region is attracting a population boom.

As you pass Lake Leila and Lake Anoka and South Florida Community College by Lake Glenada , you are reaching the town of AVON PARK, the oldest town in Highlands County.   A left (east) off Fl 64 will take you into the historic downtown district where the JACARANDA HOTEL will take you back to the 1920’s.  Down the street is the Depot Museum, with some exhibits in a California Zephyr passenger car.

The Jacaranda Hotel Open Since The 1920s

Ten miles south is LAKE PLACID, known as the “City of Murals.”  The entire downtown area is flooded with full building sized murals showing the history, people, and economy of the community.  A nice attraction here is the Henscratch Farms and Winery, which includes not just wine tasting tours, but strawberry picking and animal activities and a country store.

Lake Placid Is Filled With Murals 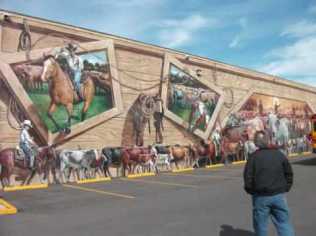 US27 now begins to curve around the southwestern shore of Lake Okeechobee, an enormous lake that should be seen to believe.  The next town is Clewiston, center of Florida’s sugar industry.  Nearby is the Big Cypress Seminole Reservation with the Ah-Tah-Thi-Ki-Museum, Florida’s best Indian center since it is surrounded by nature and manned by tribal members.   Air-boat rides, nature walks, and educational programs are part of this complex.

Sebring is the home of the famous Grand Prix but extreme sports fans know Clewiston and Sebring are centers for hang-gliding, parachuting, and learning to fly all types of aircraft.  You are less than an hour from the big populations on the East Coast.

At rustic Moore Haven the road crosses the Mamie Langdale Memorial Bridge over the Caloosahatchee Canal which allows boats to reach Fort Myers and the Gulf of Mexico.  Forty miles away on the east side of Lake Okeechobee is the route for boats going into the Atlantic.  This is Florida’s onlt cross-state canal and most of it is natural waters.

When US27 crosses the interchange with I-75 and Alligator Alley, the terrain reveals the upper reaches of the Everglades-related wilderness and large recreational areas.   The road is curving eastward on the southside of Lake Okeechobee.  A good place for boat trips and a picnic by the Big Lake is at South Bay, a town destroyed by a thirty foot tidal wave when the Hurricane of 1928 rushed across the shallow lake.  Over 2,000 people and there is a mass grave monument in a local park.

Over 2,000 People Drowned In A Tidal Wave

As US27 heads toward the Gold Coast, the area becomes swampy and power lines reveal that Broward County’s suburban developments are intruding into the wetlands.

Keep going east and US29 becomes North 36th Street in Midtown Miami, just 4 miles from US 1.  It is mind-blowing to see how fast the scenery changes from flat wetlands to urban sprawl.